Both sides need a win and this is the game where they are expected to go full throttle. Underlying this RCB vs MI match is also a certain talked-about rivalry between Virat Kohli and Rohit Sharma, the latter expected to become India's new T20I captain after the T20 World Cup. 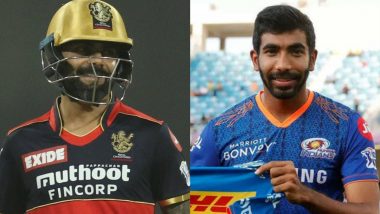 Royal Challengers Bangalore (RCB) would take on defending champions Mumbai Indians (MI) in a bid to revive their campaign. Well, a win for either side, would mean would mean a reversal in fortune as these two sides have terribly underperformed so far. Both Mumbai and Bangalore have faced defeats at the hands of Chennai Super Kings and Kolkata Knight Riders so far in the UAE leg of IPL 2021 and are left needing a win desperately if they plan on getting their campaign back on track once again. RCB vs MI, IPL 2021 Live Cricket Streaming: Watch Free Telecast of Royal Challengers Bangalore vs Mumbai Indians on Star Sports and Disney+Hotstar Online

Fans who are well-versed with making fantasy teams on Dream11 would be well-aware of how important picking the captain and vice-captain is for a match. The captain fetches double points while for the vice-captain, points are multiplied x1.5 times. As these two sides go into match 39 of the IPL 2021, let us take a look at  the who would be the best options for picking as captain and vice-captain in your fantasy team for this match.

The Indian and RCB skipper has been in terrific form and after a failure with the bat in the match against Kolkata Knight Riders, Kohli bounced back in style, scoring a stylish 53 off 41 against Chennai Super Kings, the highlight of which was cracking six which cleared the ground. He would be the best pick for the captain's slot. RCB vs MI, Dubai Weather, Rain Forecast and Pitch Report

Jasprit Bumrah has been one of those shining stars for Mumbai in an otherwise poor display by them in IPL 2021 in the UAE. The right-arm pacer, who had been on fire for India in the Test series against England earlier, has maintained his form and he would be one of those players Mumbai would look up to for inspiration against RCB on Sunday.

(The above story first appeared on LatestLY on Sep 26, 2021 01:07 PM IST. For more news and updates on politics, world, sports, entertainment and lifestyle, log on to our website latestly.com).