Royal Challengers Bangalore and Mumbai Indians have had poor fortunes in the UAE leg of IPL 2021 and only one team among these two would bring about a change in their fortunes at the Dubai International Cricket Stadium on Sunday. 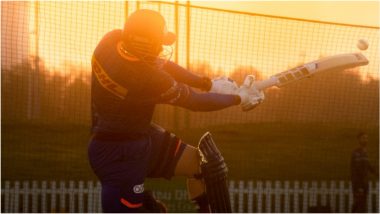 Royal Challengers Bangalore would face up against Mumbai Indians in match 39 of IPL 2021  at the Dubai International Cricket Stadium on Sunday, September 26. The match would begin at 7:30 PM IST (Indian Standard Time). Royal Challengers Bangalore began this year's IPL in India on a high, winning five out of their seven matches and they looked very much in contention to make it to the playoffs. But the UAE has seemed to become a place of misfortune for Virat Kohli's side, who have gone on to lose both their matches (against Kolkata Knight Riders and Chennai Super Kings) and now, they are left desperately needing a win to make it to the playoffs in Virat Kohli's last dance as RCB skipper. RCB vs MI, Dream11 Team Prediction IPL 2021: Tips To Pick Best Fantasy Playing XI for Royal Challengers Bangalore vs Mumbai Indians Indian Premier League Season 14 Match 39

The same has been the story for Mumbai Indians as well. The defending champions were tipped to be one of the most dominant outfits heading into the UAE leg of IPL 2021, but they just don't seem the same side which went on to win the title and even perform nicely in the India leg of IPL 2021. They too have suffered loss to CSK and KKR and are needing a win to bring some sort of life back to their struggling run so far. In this clash between these two big sides, one would revive their fortune and get back to winning ways while the other would sink further in misery. Will it be Virat Kohli's RCB or Sharma's Mumbai Indians? IPL 2021 Points Table Updated 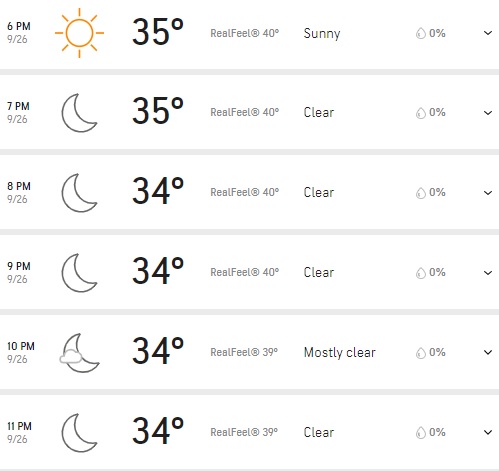 Expected weather in Dubai at the time of RCB vs MI clash (Source: Accuweather)

The pitch at the Dubai International Cricket Stadium is expected to behave the way it has so far and anything beyond 170 would be a difficult total to chase down. Having said, batsmen would have value for shots and at the same time, bowlers would also get wickets if the right areas are hit.

(The above story first appeared on LatestLY on Sep 25, 2021 05:19 PM IST. For more news and updates on politics, world, sports, entertainment and lifestyle, log on to our website latestly.com).