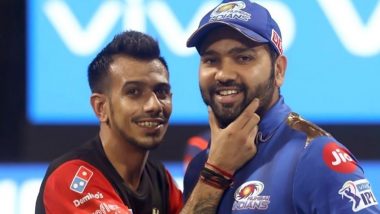 Star Indian leg-spinner Yuzvendra Chahal turns 30 on Thursday (July 23, 2020) and wishes are pouring in for him from all around the world. On the occasion, Rohit Sharma took to his official Instagram account and extended greetings for his Indian teammate. While sharing a picture with him, the Hitman called the leggie ‘India’s greatest national treasure.’ The two cricketers share a great bond and their camaraderie is not hidden from anyone. Time and time again, Rohit and Chahal have got involved a fun banter on social media which has left the fans in splits. Hence, the opener’s intriguing message on Chahal’s birthday was just on the way. Happy Birthday Yuzvendra Chahal: Yuvraj Singh, Shikhar Dhawan Lead Cricket Fraternity in Wishing the RCB Leg-Spinner.

“Many happy returns to India’s greatest national treasure #GOAT @yuzi_chahal23,” wrote Rohit on the picture-sharing website. Fans were in awe seeing Rohit’s message for his teammates as the comment section of the post got filled in a jiffy. Meanwhile, have a look at the post. Happy Birthday Yuzvendra Chahal: A Look At 5 Funny Moments of the Spinner As he Turns 30.

Apart from Rohit Sharma, the likes of Yuvraj Singh and Shikhar Dhawan also wished the RCB spinner. Dhawan asked the leggie to continue entertaining the team while the 2011-World Cup winner trolled his leg by calling him a ‘chuha’ (mouse).

Meanwhile, players all around the world must brace themselves as Indian Premier League (IPL) 2020 is most likely to place later this year as the ICC T20 World Cup has been postponed officially. However, IPL governing council chairman Brijesh Patel has announced that the tournament will take place in UAE amid COVID-19 crisis. As per the tentative schedule, the marquee tournament will be played from September 26 to November 7.

However, Chahal, Rohit and other Indian cricketers might take the field even before IPL as some stakeholders in BCCI want India to play a T20I series against South Africa ahead of the marquee tournament.

(The above story first appeared on LatestLY on Jul 23, 2020 03:19 PM IST. For more news and updates on politics, world, sports, entertainment and lifestyle, log on to our website latestly.com).