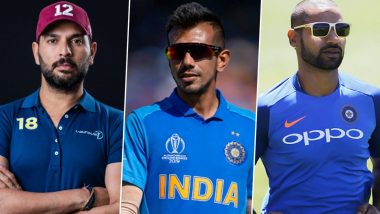 Indian leg-spinner Yuzvendra Chahal turns 30 on Thursday (July 23, 2020) and birthday wishes are pouring in for him from all around the world. Hailing from Haryana, Chahal is a vital cog of the national team in white-ball cricket and his record speak volumes of his capabilities. Despite not being a huge turner of the ball, Chahal can pierce the defences of the best of the batsmen with his street smart bowling. The leggie doesn’t give many run-scoring opportunities which force them to commit a mistake. Below, we’ll look at how Shikhar Dhawan, Yuvraj Singh and other members of cricket fraternity extended wishes for Chahal. Yuzvendra Chahal Birthday Special: Three Memorable Games of RCB Spinner in IPL.

The 2014 Indian Premier League (IPL) was the breakthrough season for Chahal as he delivered several terrific spells and bagged a lot of eyeballs. A couple of years later, the RCB bowler received his maiden India cap and didn’t look back after that. His ability to take wickets in the middle overs made him a crucial member of the Virat Kohli-led set-up. So far, Chahal has claimed 91 and 55 wickets in 52 ODIs and 42 T20Is respectively. Meanwhile, as the star leg spinner turns a year older, let’s look at how his fellow cricketers greeted him. Happy Birthday Yuzvendra Chahal: A Look At 5 Funny Moments of the Spinner As he Turns 30.

Happy birthday my bro @yuzi_chahal 🎂😊 Keep being the funny guy that you are and entertaining us 😂 #HappyBirthdayChahal pic.twitter.com/4Zqz1EIibY

Yuzi Chahal or should I call you Mr. Chuha 🐁 😂 special wishes for you to gain some weight 💪🏻 keep entertaining with your funny videos & comments! Wishing you a successful year ahead, Happy Birthday 🎂 @yuzi_chahal #HappyBirthdayChahal pic.twitter.com/tK6lpjq0jf

Happy birthday to my partner in crime, and most importantly brother on and off field @yuzi_chahal 😎

His career-best returns of 6/25 are the best bowling figures by an Indian spinner in men's T20Is.

Meanwhile, IPL 2020 is most likely to place later this year as the ICC T20 World Cup has been postponed officially. However, IPL governing council chairman Brijesh Patel has announced that the tournament will take place in UAE amid COVID-19 crisis. As per the tentative schedule, the marquee tournament will be played from September 26 to November 7.

However, Chahal might take field even before the start of the tournament as some stakeholders in BCCI reportedly want the Indian team to play a T20I series against South Africa ahead of the marquee tournament.

(The above story first appeared on LatestLY on Jul 23, 2020 02:30 PM IST. For more news and updates on politics, world, sports, entertainment and lifestyle, log on to our website latestly.com).