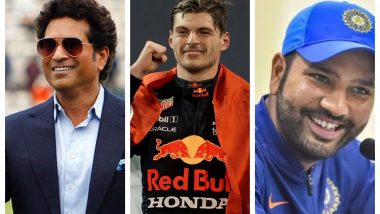 While Sachin Tendulkar hailed Lewis Hamilton and said it was sheer bad luck that he lost the match, Rohit Sharma used a cricketing analogy to congratulate Verstappen. Sachin also congratulated the Dutch racer for the win but also praised Lewis Hamilton and lauded him for the kind of a season he had had in 2021. The British racer was eyeing to surpass Michael Schumacher's record by winning his eighth title. But that surely didn't happen. For now, check Rohit Sharma and Sachin Tendulkar's tweets below.

Congrats to Max for becoming the World Champion for the 1st time & there will be many more.

However, my heart goes out to Lewis. What a season he’s had too. If not for the safety car, the trophy would’ve been his. Sheer bad luck. All the best for the next season. pic.twitter.com/pYPLoin4gO

Before the finale, both Lewis Hamilton and Max Verstappen had 369.5 points in their kitty and it was more of a tug of war for who would walk away with the title.

(The above story first appeared on LatestLY on Dec 13, 2021 10:41 AM IST. For more news and updates on politics, world, sports, entertainment and lifestyle, log on to our website latestly.com).