Umran Malik Should Be in India Test Side Immediately, Says Kevin Pietersen

Former England cricketer Kevin Pietersen wants the Board of Control for Cricket in India (BCCI) to immediately blood Sunrisers Hyderabad pace sensation Umran Malik into the Test side, as there is "no point waiting around". 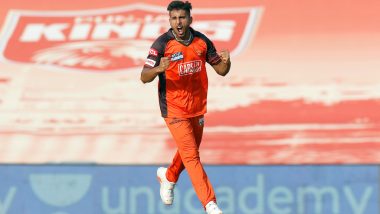 Mumbai, May 7: Former England cricketer Kevin Pietersen wants the Board of Control for Cricket in India (BCCI) to immediately blood Sunrisers Hyderabad pace sensation Umran Malik into the Test side, as there is "no point waiting around". Umran bowled the fastest delivery of IPL 2022 when he clocked 157 kmph during his team's match against Delhi Capitals at the Brabourne Stadium, here on May 5. The 22-year-old achieved the feat on the fourth ball of the 20th over, which was hammered for four by Rovman Powell. Malik eventually finished his bowling spell with figures of 4-0-52-0. Kevin Pietersen Praises Liam Livingstone’s Performance for PBKS and Advises ECB To Include Him in England Test Side.

Earlier, the young cricketer had bagged his maiden IPL five-for in the match against Gujarat Titans at the Wankhede Stadium in Mumbai. Malik's spell of 4-0-25-5 -- the best of IPL 2022 so far -- rattled Gujarat's top and middle-order in the 196-run chase. Umran, who has been enthralling cricket fans with his searing pace in the cash-rich league is learning the tricks from former South African great Dale Steyn, who is currently serving as Sunrisers Hyderabad's pace-bowling coach. "There are so many exciting young Indian pace bowlers in the IPL at the moment. Of the overseas players, only Lockie Ferguson and Alzarri Joseph are matching them for pace. Kartik Tyagi and Mohsin Khan are both rapid, but the one that's most exciting is Umran Malik. He bowled a 157kph delivery against Delhi on Thursday (May 5), which is serious pace," wrote Pietersen in Betway Insider.

"It's amazing to see such bold and exciting talent on display, and he has a perfect mentor in the SRH dugout in Dale Steyn. There is no better man to sit with and talk about fast bowling. To me, there is no point waiting around. Malik should be in the reckoning for India's Test team, as well as white-ball sides. Nobody enjoys facing that kind of pace." Pietersen opined that Umran can be employed in short 3-4 over bursts much like former Australian pace bowler Mitchell Johnson. Pat Cummins Reminds Front-Line Workers in India of Their Responsibility, As COVID Cases Rise.

"You could use him like Australia used to use Mitchell Johnson, in short three- or four-over spells so that he can just let rip. If I was an India selector, I'd pencil him in for that Test match against England in July. The England batters are currently facing 70mph seamers in county cricket, so they certainly won't want to be facing 90-95mph bowling all of a sudden. He (Umran) is a breakout star of this competition and India would be silly not to use him straight away," opined Pietersen.

(The above story first appeared on LatestLY on May 07, 2022 12:55 PM IST. For more news and updates on politics, world, sports, entertainment and lifestyle, log on to our website latestly.com).