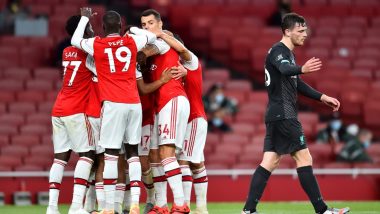 Arsenal came back from a goal down to beat Liverpool 2-1 and end their hopes of braking Premier League’s record points tally. The defeat was Liverpool’s third this season and dashed any chances of equalling Man City’s record 100 points tally in a single Premier League campaign. The visitors started well and went ahead inside the opening 20 minutes when Sadio Mane scored from an Andy Robertson’s low cross. But Virgil van Dijk and goalkeeper Alisson Becker’s errors in the first half gave Arsenal a chance to get back into the game and the Gunners were ruthless in their finishing. Liverpool to Be Presented with Premier League Trophy After Match Against Chelsea at Anfield Stadium on July 22.

The hosts scored from both the chances they were gifted in the first half and took the lead. Alexandre Lacazette scored the opening goal for them after intercepting lousy back pass to the goalkeeper. While Reiss Nelson scored the second after Lacazette found him open inside the Liverpool box having caught the Liverpool defence off guard.

Kieran Tierney has been spotted with his pet after Arsenal’s 2-1 victory over Liverpool pic.twitter.com/ucnAqnMTxs

- Win against UEFA at CAS

One of the greatest weeks in City’s history... pic.twitter.com/abDzS4YsA7

☑️ Pep giving it out in the presser.

This kid deserves a statue. Since he wrote to Kloop, Liverpool haven’t been the same pic.twitter.com/yeOBkET2dr

Liverpool fans playing career mode so they can get 100 points pic.twitter.com/Nyd6gjQyaC

Liverpool lost to the worst Arsenal team in 30 years after spending months comparing themselves to the Invincibles. pic.twitter.com/p1YZ1a7foa

Arteta stop Liverpool with score 2 - 1 and stop them from reaching 1️⃣0️⃣0️⃣ points 😜🧠 pic.twitter.com/iiwF3ORnrc

Liverpool dominated the second half and came close to equalising several times on the day but failed to find the net. The defeat was their third in 36 Premier League games and ended all dreams of recording the highest points tally as well the most number of wins in a single Premier League campaign.

(The above story first appeared on LatestLY on Jul 16, 2020 09:02 AM IST. For more news and updates on politics, world, sports, entertainment and lifestyle, log on to our website latestly.com).