Here’s another match from Group E where we have Cameroon locking horns with New Zealand at the Stade de la Mosson. 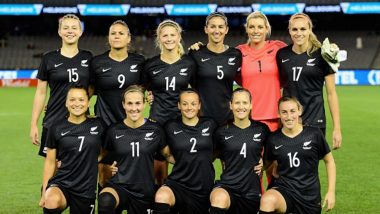 Here’s another match from Group E where we have Cameroon locking horns with New Zealand at the Stade de la Mosson. This will be the end of action for the Group E. For now, Netherlands and Canada have already secured a berth in the Round of 16. Cameroon and New Zealand are yet to register a victory in the 2019 FIFA Women’s World Cup. Before we talk about the live streaming details, let’s have a look at how the team fared in the tournament so far.  FIFA Women's World Cup 2019 Schedule Free PDF Download in IST: Fixtures, Groups, Time Table in Indian Time with Venue Details of Football WC in France.

New Zealand lost to Netherlands 1-0 and later against Canada by 2-0. Whereas, Cameroon lost to Canada 1-0 and Netherlands 3-1. Which means a draw will not be enough for the sides to advance into the round of 16. Now, let’s have a look at the live streaming details of the game.

Cameroon vs New Zealand is scheduled to happen today on June 20, 2019 (Thursday), Stade de la Mosson, France. This is the last match of Group E of 2019 FIFA Women’s Football World Cup. The match will begin at 9:30 PM IST.

Cameroon vs New Zealand FIFA Women’s Football World Cup 2019 match will also be available for live streaming on Sony Liv if in case you are unable to tune into television for whatever reasons.  Also, the official website of FIFA will bring you all the live updates of the game.

(The above story first appeared on LatestLY on Jun 20, 2019 08:15 PM IST. For more news and updates on politics, world, sports, entertainment and lifestyle, log on to our website latestly.com).