Robert Jarni has expressed confidence in his NEUFC side that they are capable of winning against tough opposition like Goa. Federico Gallego is in line for his first start of the season and will likely replace Panagiotis Triadis who has left the club. 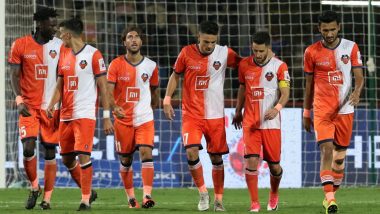 FC Goa has been one of the top sides in this years Indian Super League, and they will have a chance to go top of the pile when the Gaurs hosts the NorthEast United FC. Goa with 23 goals have been the most prolific scorers until now, and it is has been their attacking instinct which makes them standout distinct. They are level on points with ATK at 21 points, and it is only the goal difference that separates the two sides. Opponents NEUFC are struggling at 9th in the table but have a few games in hand to make up for lost ground. FC Goa Vs NorthEast United FC - Live Football Score.

Robert Jarni has expressed confidence in his NEUFC side that they are capable of winning against tough opposition like Goa. Federico Gallego is in line for his first start of the season and will likely replace Panagiotis Triadis who has left the club. There will be a close contest between Jose Leudo and Martin Chaves for a starting berth and looks like it will be the latter who will triumph. Asamoah Gyan will be the man to watch out for the visitors with the Ghanaian man having so much experience under his belt.

Goa were thumped by Bengaluru but they do not have a reason to panic yet as the team is playing with confidence. Ferran Corominas is one of the top scorers this season and with him in the team, there will be goals for the home side. Hugo Boumous and Brandon Fernandes in midfield will look to stamp their authority on the game with Lenny Rodrigues cutting out any attack by the opposing Highlanders. Goa dominate possession at home and this game will be no different in terms of pattern.

The Indian Super League 2019-20 match between Odisha and Chennaiyin will be played at the Jawaharlal Nehru Stadium in Goa on January 08, 2020 (Wednesday). FCG vs NEUFC football match is scheduled to start at 07:30 pm IST (Indian Standard Time).

FC Goa vs NorthEast United match live streaming will be available on Hotstar which is the official online media streaming platform of Star Network. Meanwhile, fans can also follow LatestLY for the live score updates of FCG vs NEUFC ISL match. The last time these two teams met, the game ended in a 2-2 draw with a few dismissals and bans following the game due to altercation on the pitch. This time Goa will look to keep their tempers in check and secure a home win.

(The above story first appeared on LatestLY on Jan 08, 2020 04:15 PM IST. For more news and updates on politics, world, sports, entertainment and lifestyle, log on to our website latestly.com).