Borussia Dortmund believe that they have protected Sancho’s value by extending his current contract until 2023 and are confident other clubs like Barcelona and Real Madrid, who have confirmed that will not make any major signing this summer, will enter the market for Sancho next season enabling Dortmund to broker a better deal. 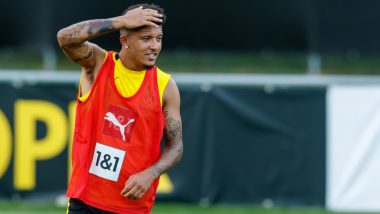 Manchester United could find themselves in a three-way battle for Jadon Sancho next year if they fail to land him this summer transfer window. Sancho, 20, is heavily linked to the Red Devils and thought to be their priority this summer. But the club have so far failed to negotiate a transfer fee with Borussia Dortmund for the talented England star. Dortmund, who signed Sancho from Manchester City in 2017, have insisted that Sancho will remain at the club next season and are expecting the likes of Barcelona and Real Madrid to bid for the player next summer. Ex-Manchester United Defender Rio Ferdinand Calls Jadon Sancho ‘Best Young Player in World’.

Dortmund had set United and every other suitor an August 10 deadline for the signing of Sancho. The Bundesliga club have slapped a €120 million price tag on the 20-year-old and have asked United to pay the record transfer fee upfront if they are to land the right-winger this summer. The Red Devils have, however, refused to budge in and pay the fee, which could make Sancho the most expensive England player. Despite Jadon Sancho Transfer Bombshell, Here Is Why Manchester United Fans Shouldn’t Be Worried.

United have also failed to negotiate a transfer fee for Sancho within the August 10 deadline and called out Dortmund for setting a deadline so early into the transfer window. The Red Devils called it ‘artificial’ and believe they can still negotiate a deal for the player. Dortmund have, however, refused to lower their valuation for Sancho.

The German club have also announced that they have extended Sancho’s current contract until 2023 and expect him to stay at the club for the next season. According to a report from Mirror, the German club believe that they have protected Sancho’s value by extending his current contract until 2023 and are confident other clubs like Barcelona and Real Madrid, who have confirmed that will not make any major signing this summer, will enter the market for Sancho next season enabling Dortmund to broker a better deal.

Ole Trafford reportedly sees this move as a ploy by the German club to force United into paying their demand for Sancho this summer to avoid getting into a bidding war with Barcelona and Real Madrid next season. Dortmund sporting director Michael Zorc has already announced in a press conference that Sancho, who joined the squad for pre-season in Switzerland, will be at the club for next season.

Manchester United have refused to pay anything beyond €80 million for Sancho and believe this to be a fair price in the times of coronavirus pandemic, which has had a bad impact on the finance of most football clubs and also in the transfer market. Dortmund though are in no pressure to sell this season and want to keep Sancho in hope of seeking a better deal next summer.

(The above story first appeared on LatestLY on Aug 14, 2020 10:10 AM IST. For more news and updates on politics, world, sports, entertainment and lifestyle, log on to our website latestly.com).