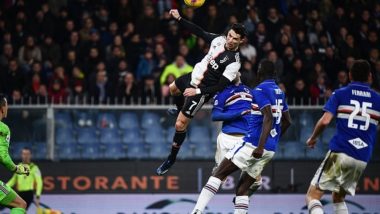 Juventus is all set to start its Serie A 2020-21 campaign with a game against Sampdoria. The match is well-cherished as Cristiano Ronaldo challenged gravity scoring that amazing header where he jumped 2.56 meters and silenced his critics. Now, ahead of the first game against Sampdoria, Juventus has declared 22- member squad against the team. In this article, we shall also bring to you the probable playing XI. But first, let’s have a look at the preview of the game in brief. This is Andrea Pirlo’s first assignment after he was made the coach. Juventus sacked Maurizio Sarri after they lost in the Champions League 2019-20 against Lyon. Juventus vs Sampdoria, Serie A 2020-21 Free Live Streaming Online & Match Time in IST: How to Get Live Telecast on TV & Football Score Updates in India?

Cristiano Ronaldo scored twice but that just did not help Juventus get through the round of 16 and the Bianconeri lost on away goals. Talking about the current squad for the match which will be held at the Juventus Training Center, the most prominent absentee was Paulo Dybala who has been ousted due to his thigh problem.  Matthijs de Ligt, Alex Sandro and Federico Bernardeschi are out due to their respective injuries.

Juventus and Sampdoria have previously met 124 times in Serie A where the Bianconeri has walked away with the last laugh 61 times. The team has faced 37 draws and 26 losses. Now let's have a look at the 22-member squad and predicted line-up of the  team:

The team is expected to step into the game with a 3-5-2 formation. The match will be held at 12.15 IST. Juventus has won the Serie A tournament nine times and they would be looking forward to clinching their 10th title.

(The above story first appeared on LatestLY on Sep 20, 2020 10:01 PM IST. For more news and updates on politics, world, sports, entertainment and lifestyle, log on to our website latestly.com).