He struggled massively during the 2018 FIFA World Cup, Lionel Messi could score just one goal for Argentina during the mega-event in Russia. 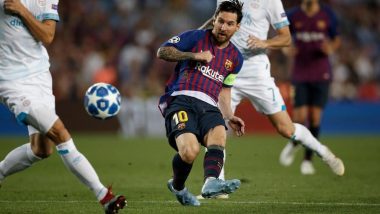 He struggled massively during the 2018 FIFA World Cup, Lionel Messi could score just one goal for Argentina during the mega-event in Russia. However, that’s passe! Messi is back to business and how! As Barcelona played against PSV Eindhoven in the first game of the UEFA Champions League 2018, Messi scored a hat-trick.  The team won by 4-0 and with this, Lionel Messi netted an eighth hat-trick in the Champions League. The first goal was scored in the 32nd minute and through a free kick. Lionel Messi named the captain of Barcelona.

The free-kick was made from 20 yards. Whereas the second goal was scored by Ousmane Dembele in the 74th minute. Messi, however, continued his dream run by scoring goals at 77th and 87th minute. Check out the video highlights of the match below.

The 31-year-old now has 14 consecutive goals in the Champions League and has become the second player to achieve the feat after Real Madrid legend Raul. He has overtaken the reins of Barcelona after the departure of Andre Iniesta and manager Ernesto Valverde also couldn’t stop praising the new captain.

"Normally if you score a hat-trick you frame it. Messi makes the extraordinary look routine," Valverde said while praising Messi’s first goal. "We're seeing something unique, something that hasn't been seen in many years. It will be tough to find anyone else like him,” he further added.

While speaking to uefa.com, former Barcelona midfielder Ronald de Boer went on to call Messi a predator. “This was typical of the way Messi has been playing the last two, three years. He is a predator. He covers less distance than other players, but when he needs to spring into action, he does. You saw that with his third goal," said Ronald de Boer.

(The above story first appeared on LatestLY on Sep 19, 2018 12:00 PM IST. For more news and updates on politics, world, sports, entertainment and lifestyle, log on to our website latestly.com).