Messi’s current contract at Barcelona expires next summer but the Argentina star can sign a pre-contract with any club this January if he does not renew his contract with Barcelona. The 33-year-old has refused to sign a new contract at the club and had attempted to force a transfer last summer. Boateng wants him to sign for Napoli. 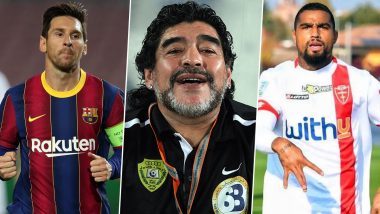 Kevin-Prince Boateng wants Lionel Messi to sign for Napoli and pay the ultimate tribute to late Diego Maradona, who passed away on November 25, 2020, after a sudden cardiac arrest at his home. Messi had already paid his respect to the late football icon on Instagram and also by taking off his Barcelona shirt after scoring against Osasuna and revealing an iconic Newell’s Old Boys jersey with the no 10 on it. But Boateng, who played alongside Messi at Barcelona in 2019, feels the six-time Ballon d’Or winner could pay a perfect tribute to Maradona if he joins Napoli. Cristiano Ronaldo vs Lionel Messi: Gianluigi Buffon Weighs in on the Debate, Admits Messi is a More Complete Player.

Messi’s current contract at Barcelona expires next summer but the Argentina star can sign a pre-contract with any club this January if he does not renew his contract with Barcelona. The 33-year-old has refused to sign a new contract at the club and had attempted to force a transfer last summer. But Boateng still believes Messi will finish his career at Barcelona. He though hopes he makes a move to Serie A and signs for Napoli. Cristiano Ronaldo’s Sister Elma dos Santos Aveiro Brutally Trolls Lionel Messi, Posts a Picture of Argentine Worshipping CR7.

"Messi's going to finish his contract at Barcelona, (but) how amazing would it be if he would just call Napoli and say 'I will come'?" Boateng told ESPN.

Maradona became footballing God at Napoli after joining them from Barcelona in 1984. He led the club to their first Serie A title in 1987 and also guided the club to a second league title three seasons later among other trophies. It was also during his time with Napoli that Maradona led Argentina to World Cup glory and clinched the 1986 FIFA World Cup title. Napoli retired Maradona’s jersey No 10 at the club after he left. Messi will therefore have to wear a different number if he joins Barcelona

"'They don't give out the No.10 shirt anymore, but I would love to honour Maradona's No.10 and I would love to come and play one year or two years at Naples, without thinking about money or nothing, just heart',” Boateng added.

He believes the move and Messi’s apparent stay at Napoli would be like a movie script – unreal. "It would be like a movie," Boateng said. "He'd have to go to practice by a f***ing helicopter because people would eat him alive. They'd be so happy. But just that story: 'In honour of Maradona, I will come and play for Naples', what kind of story would that be for the world, not only for football, for the world?

"It would be a message, it would be history everywhere. I just wish I would be in Messi's shoes. I want to be Messi. I would call the president of Naples and I would tell him,” Boateng, who currently plays for Serie B club Monza, added.

Messi, meanwhile, paid his tribute and respect to the late football legend by celebrating his goal against Osasuna wearing the iconic Newell’s Old Boys jersey. Messi came through Newell’s Old Boys club in Argentina. Maradona also spent one season at the club after returning from Europe and wore the No 10 jersey at the club.

(The above story first appeared on LatestLY on Dec 11, 2020 09:03 PM IST. For more news and updates on politics, world, sports, entertainment and lifestyle, log on to our website latestly.com).