Juventus head coach would seek his first win on his return to the club this season as they are still trying to cope up with Cristiano Ronaldo's absence as the Portuguese star made his way back to Manchester United, joining them after a period of 12 years. Paulo Dybala is expected to be Juve's main man and Allegri would want him to inspire his side to a victory. 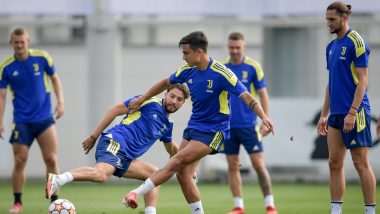 Juventus would take on Malmo in the UEFA Champions League 2021-22 on Wednesday, September 15. The Group H fixture is scheduled to begin at 12:30 am IST and would be played at the Swedbank Stadion in Sweden. Losing Cristiano Ronaldo towards the fag end of the transfer window indeed was a body blow to Juventus, who have had a winless start to life after the Portuguese superstar, so far in the Serie A 2021-22 competition. Despite head coach Max Allegri insisting that he has a good enough squad to carry on without the five-time Ballon d'Or winner, so far, that hasn't worked out, Juventus are currently 16th in the Serie A 2021-22 table, with no wins and just one point to their name. But Allegri's side would seek a fresh start when they begin their Champions League 2021-22 journey against Malmo on Wednesday. One can argue that it is just the beginning of the season and hence, there's room for Juventus to bounce back. And they would fancy their chances of a win against Malmo to notch up their first victory of the season. Cristiano Ronaldo Goal Video: Watch Portuguese Star Score on His Champions League Return for Manchester United Against BSC Young Boys

Allegri would look up to Paulo Dybala to pull off a good performance and lead his side to a victory in this Group H encounter. Malmo on the other, are winless too in their domestic competition and it would take a huge effort from them to defeat the Turin giants. But football can be interesting and unpredictable and this match promises to be a thrilling one, regardless of the outcome. Juventus are, however, expected to win the match 2-0. Here are the live streaming details of this match.

Malmo vs Juventus clash in UEFA Champions League 2021-22  will be played at the Swedbank Stadion in Malmo, on September 15, 2021 (Wednesday). The game has a scheduled time of 12:30 am IST (Indian Standard Time).

Sony Pictures Network are the official broadcasters of UEFA Champions League 2021-22 in India and will telecast the games live on its channels. Fans can tune into Sony Six HD/SD channels to watch the live telecast of Malmo vs Juventus on TV.

Sony Pictures Network’s official OTT platform Sony Liv will be streaming the game live for its fans in India. You can tune into the Sony Liv app or website to watch Malmo vs Juventus, UEFA Champions League 2021-22 live streaming online. JioTV would also provide live streaming for this match.

(The above story first appeared on LatestLY on Sep 14, 2021 11:49 PM IST. For more news and updates on politics, world, sports, entertainment and lifestyle, log on to our website latestly.com).