Argentina are only one of the two teams still undefeated in the South American qualifiers and will be aiming to continue that run. The Lionel Scaloni led unit won both their games in the previous round of matches. Meanwhile, Paraguay sit just outside the qualification spot and a win could see them climb to fourth in the table if other results go their way. 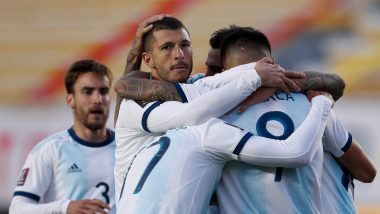 Copa America champions Argentina play Paraguay in their latest 2022 World Cup qualifier game with the team full of confidence at the moment with their recent successes on the pitch. They are currently second in the points table behind Brazil but there is a massive six-point gap between the two South American giants. After their game against Brazil ended in a debacle following the quarantine issues surrounding players, Argentina followed it up with a 3-0 win over Bolivia courtesy of a Lionel Messi hat-trick. Meanwhile, fans searching for Paraguay vs Argentina, CONMEBOL World Cup Qualifiers live streaming can scroll down below. Lionel Messi in Tears While Celebrating Copa America 2021 Trophy With Fans After Argentina’s 3–0 Win Over Bolivia (Watch Full Video).

Angel Romero and Oscar Romero are expected to make the playing eleven for Paraguay. David Martinez and Blas Riveros are not fit and have hence not been called upon to the national camp. Newcastle United’s Miguel Almiron is the key man in attack for the hosts and his brilliant work rate helps the team when not in possession.

Lionel Messi is the talisman for Argentina and his goal-scoring form of late has made his nation one of the favourites to lift the title. Paulo Dybala and Sergio Aguero are out with injuries with Papu Gomez and Angel Correa getting a chance in the squad. Lautaro Martinez has partnered well with Lionel Messi in the final third and the duo could wreak havoc once again against Paraguay. Their defence has been in fine form helping Argentina remain unbeaten so far in the qualifiers.

When Is Paraguay vs Argentina Match Scheduled to Take Place? Date, Time and Venue of CONMEBOL 2022 World Cup Qualifier?

The match between Paraguay vs Argentina clash in 2022 FIFA World Cup Qualifiers CONMEBOL will be played at the Defensores El Chaco Stadium in Paraguay. The match is scheduled to start on October 08, 2021 at 04:30 AM IST (Indian Standard Time).

Unfortunately, Paraguay vs Argentina match will not be live telecasted in India as there are no official broadcasters available for the 2022 FIFA World Cup CONMEBOL qualifiers in India. Fans will therefore not be able to catch the live-action of the CONMEBOL match on their television sets.

Since there are no official broadcasters available for the 2022 FIFA World Cup CONMEBOL qualifiers in India, fans will also not be able to watch Paraguay vs Argentina match online. But fans can always follow the match on social media handles of both teams.

Paraguay will keep themselves compact at the back and look to hit their opponents on the break. Unfortunately for them, Argentina are just too good at the moment to play against

(The above story first appeared on LatestLY on Oct 07, 2021 08:25 PM IST. For more news and updates on politics, world, sports, entertainment and lifestyle, log on to our website latestly.com).