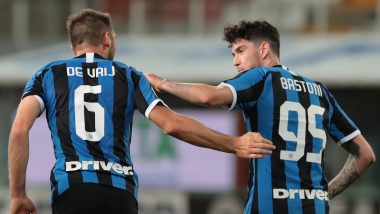 Rome, June 29: Two late goals from defenders Stefan de Vrij and Alessandro Bastoni prevented Inter Milan from an away defeat, as the Nerazzurri edged past Parma 2-1 in the 28th round of Italy's Serie A.

On Sunday, Inter traveled to Parma without regular defender Milan Skriniar, who was serving the first of a three-match suspension, so Diego Godin stepped in to partner Danilo D'Ambrosio and de Vrij in defense, reports Xinhua news agency.

Inter were dominant but it was the hosts who broke the deadlock in the 15th minute, when Gervinho caught a long pass, shook off Antonio Candreva's sliding tackle, and smashed home from close range. Zlatan Ibrahimovic Returns to AC Milan Group Training For the First Time After his Injury, Could Play the Game Against SPAL.

The Beneamata started to pin Parma back as time wore on, and finally found the net in the 84th minute when Lautaro Martinez knocked on Ashley Young's corner for de Vrij to steer his header into the net.

The home side were dealt another below as Juraj Kucka was sent off for dissent after Inter's equaliser.

The game climaxed in the 87th minute when Victor Moses burst down the right and floated a cross for the unmarked Bastoni, who had time and space to fire home.

It was a good day for both Milan clubs, as AC Milan made it two wins from two following the resumption of Serie A, defeating Roma 2-0 at the San Siro.

After a goalless first half, Milan scored the opener in the 76th minute when Antonio Mirante performed a double save to deny Franck Kessie and Ante Rebic, but could do nothing about Rebic's follow-up attempt from close range.

Milan sealed the win in the 88th minute as Hakan Calhanoglu converted a penalty after Theo Hernandez was kicked by Chris Smalling in the box.

In Sunday's other games, fourth-placed Atalanta enjoyed a 3-2 away victory over Udinese, Sampdoria suffered a 2-1 home defeat to Bologna, while Sassuolo and Verona shared the spoils in a 3-3 draw.

After the 28th round of matches, Juventus continue to top the table with 69 points, four ahead of second-placed Lazio. Inter are third with 61 points, followed by Atlanta with 57.

(The above story first appeared on LatestLY on Jun 29, 2020 09:57 AM IST. For more news and updates on politics, world, sports, entertainment and lifestyle, log on to our website latestly.com).