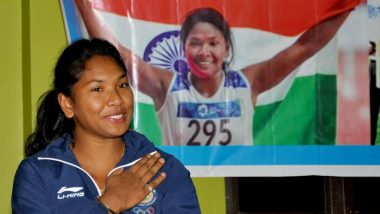 Arjuna Awardee Swapna Barman is in hot waters after the Forest Department issued a notice to the Indian heptathlete for allegedly hoarding ‘illegal’ timber at her house. The 2018 Asian Games gold medalist’s house in Kaliaganj, Jalpaiguri was raided on Monday by a led by Belakoba Range official Sanjay Dutt, who found plenty of illegal timber and have issued a notice to find its source. Femina Magazine Features Swapna Barman, Vinesh Phogat, Rahi Sarnobat, and Hima Das on Its Cover: See Pic of the Asian Games 2018 Medal Winners.

According to The Bridge, The Indian athlete’s family could not provide a satisfactory explanation of how the timber was obtained and have a month’s time to reply to the notice. An official from the forest department told Bengali newspaper Ei Samay ‘At first, Swapna Barman’s family prevented us from entering their house. In the end, the forest workers had to enter the house by showing the search warrant.’

Swapna Barman is staying at her home in Patkata area of ​​Jalpaiguri and a new home is being built next to the present house and it is understood that the timber was used for that purpose. Though the athlete’s family gave an explanation that they have proper documentation for the stockpile of wood but were able to provide it as several items are scattered during the construction.

After the search on Monday, Belakoba Ranger Sanjay Dutt said, ‘Looking at the wood stored in the house, we suspect that all this wood has been collected from the river. But it is illegal. Swapna Barman’s family wanted time.'

(The above story first appeared on LatestLY on Jul 14, 2020 04:40 PM IST. For more news and updates on politics, world, sports, entertainment and lifestyle, log on to our website latestly.com).