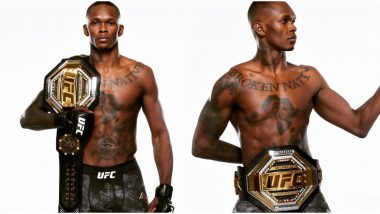 Israel Adesanya, the Nigerian origin MMA fighter, successfully defended his Middleweight Championship title against Brazil's Paulo Costa at Ultimate Fighting Championship (UFC) 253 main event. The fight took place on September 26, 2020, in  Abu Dhabi, United Arab Emirates (UAE). Adesanya with this victory has now defended his UFC Middleweight title the second time in a row. He now has an undefeated record of 20 wins and no losses. This match between Israel Adesanya vs Paulo Costa was the second instance in UFC history where two undefeated wrestlers met. Meanwhile, you can take a look at funny Twitter reactions on Israel Adesanya's victory over Paulo Costa. UFC 249: Khabib Nurmagomedov vs Tony Ferguson Set to Be Cancelled for Fifth Time.

The match between Israel Adesanya and Paulo Costa was the most awaited UFC 253 fight in the year 2020. Adesanya dominated Paulo Costa in the night's main event by blasting Costa's legs with kicks before finishing the fight in the second round with a left hook that put Costa on the canvas. The Nigerian fighter started the second round with a counter-punch and Costa never seemed to recover from it. Adesanya won the match in the second round by TKO, as the fight lasted for only 3 minutes 59 seconds. Prior to this Israel Adesanya has won four matches via TKO/KO. Now let us see how Twitter Reacts. Conor McGregor to Replace Khabib Nurmagomedov at UFC 249? Irishman’s Coach Drops Huge Hint.

👑 @Stylebender is the undefeated king of the middleweights.

#Costa is confident and the fans think he will win, however

"Hold this. I wanna dance." 😂@stylebender had more moves to show off after #UFC253 pic.twitter.com/gcAeQE7hzh

Israel Adesanya putting Nigeria on the map by speaking his dialect.

Paulo Costo Asking For His Belt

Adesanya While Fighting Against Costa

Israel Adesanya while Costa is being attended to by medics:#UFC253

(The above story first appeared on LatestLY on Sep 27, 2020 12:27 PM IST. For more news and updates on politics, world, sports, entertainment and lifestyle, log on to our website latestly.com).