2021 Apple Design Awards: NaadSadhana, iOS App Created by Sandeep Ranade Selected as One of the 12 Winners

NaadSadhana, a studio-quality iOS music app created by Pune-based classical khayal vocalist Sandeep Ranade, has been selected as one of the 12 winners of the 2021 Apple Design Awards. 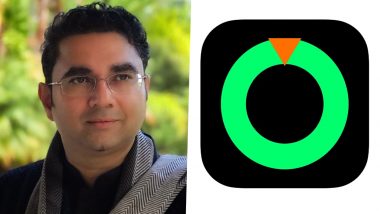 New Delhi: NaadSadhana, a studio-quality iOS music app created by Pune-based classical khayal vocalist Sandeep Ranade, has been selected as one of the 12 winners of the 2021 Apple Design Awards. The app helps musicians of all genres and any expertise perform and publish their music without boundaries. After first finding its tune as an app for practicing Indian classical singing, NaadSadhana has expanded to support seven different genres of music. Apple iPadOS 15 Announced With New Homescreen & Multitasking Tools.

Ranade told IANS on Friday that Apple hardware will "unlock richer, deeper and more intelligent and creative analysis and decision-making". "Even today, NaadSadhana is an iOS exclusive app because no other platform has a low-latency audio stack or so many building blocks for complex audio processing, neural networks, analysis and so on," he added. "Two years ago, I attended my first WWDC and the Apple Design Awards honestly felt like an Oscars Award ceremony. I never, in a million years, imagined that my work and research would ever get this high an honour," he told IANS.

"This year's Apple Design Award winners have redefined what we've come to expect from a great app experience, and we congratulate them on a well-deserved win," said Susan Prescott, Apple's vice president of Worldwide Developer Relations. "The work of these developers embodies the essential role apps and games play in our everyday lives, and serve as perfect examples of our six new award categories,: she added.

Apple on Thursday hosted its annual Apple Design Awards, celebrating 12 best-in-class apps and games from developers around the globe. Ranade has also created viral songs like 'Na Corona Karo', 'Anand Barasao', and an optimised 15-minute vocal workout titled 'NaadYoga'. He is also a singer, composer and educator and a student of Late Padma-Vibhushan Sangeet Martand Pandit Jasraj, performing and teaching students all over the world.

(The above story first appeared on LatestLY on Jun 11, 2021 12:44 PM IST. For more news and updates on politics, world, sports, entertainment and lifestyle, log on to our website latestly.com).