Android 13 With New Features Rolled Out for Pixel Smartphones 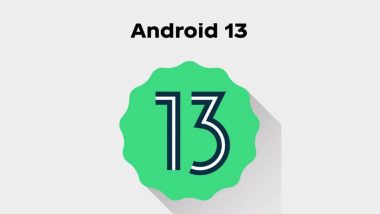 "Android 13 comes with new capabilities for your phone and tablet, like extending app colour theming to even more apps, language settings that can be set on an app level, improved privacy controls..." Sameer Samat, VP of Product Management, Android and Google Play, said in a blogpost.

An update so good, we officially made 13 a lucky number again. Get the most out of your device with #Android13. https://t.co/4shyAMBCOk

The company said it comes with an evolved look and style that builds on Material You. Users can customise non-Google apps to match their phone's wallpaper theme and colours, making the home screen more cohesive and unique to the style. Android 13 features an updated media player that tailors its look and feels based on the music or podcast you're listening to.

"For example, when you are listening to music, the media player spotlights album artwork and has a playback bar that dances as you progress through a song. It even works for media played through Chrome," the company said.

It allows users further to customise Bedtime mode with wallpaper dimming and dark theme. These screen options help users' eyes adjust to the dark when they are about to go to bed -- and get back to sleep if you wake up and check your phone in the middle of the night.

Users can also prevent any unwanted access to their clipboard. If they copy sensitive data like they email address, phone number or login credentials on your device, Android will automatically clear your clipboard history after a while.

On supported headphones that enable head tracking, Spatial Audio shifts the source of the sound to adapt to how you turn your head, giving you a more immersive listening experience on your Android phone or tablet. Android 13 adopts Bluetooth Low Energy (LE) Audio, a new Bluetooth audio standard that results in lower latency than classic audio. This allows you to hear audio that better syncs with the sound's source, reducing delay. With Bluetooth Low Energy (LE) Audio, you can also enjoy the enhanced audio quality and broadcast audio to multiple devices at the same time.

(The above story first appeared on LatestLY on Aug 16, 2022 12:52 PM IST. For more news and updates on politics, world, sports, entertainment and lifestyle, log on to our website latestly.com).