Elon Musk Will Not Get Special Treatment on the Micro-Blogging Platform, Says Twitter

Micro-blogging platform Twitter has said it will not give Tesla CEO Elon Musk special treatment on the platform, after earning a seat on the company's board of directors. 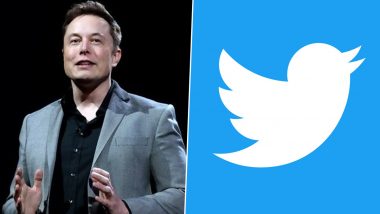 San Francisco: Micro-blogging platform Twitter has said it will not give Tesla CEO Elon Musk special treatment on the platform, after earning a seat on the company's board of directors. In a statement to The Verge, Twitter spokesperson Adrian Zamora said the platform is "committed to impartiality in the development and enforcement of its policies and rules," implying that Musk will be subject to the same Twitter rules as everyone else. Twitter CEO Parag Agrawal Announces Elon Musk's Appointment to Twitter Board.

In other words, Twitter could likely still ban or suspend Musk, if need be. In regards to Musk's potential influence on the platform, Zamora said board members are not able to make decisions about Twitter's policies, but they still do play a large part when it comes to providing guidance and feedback.

"Our policy decisions are not determined by the Board or shareholders," Zamora was quoted as saying. "As always our Board plays an important advisory and feedback role across the entirety of our service. Our day to day operations and decisions are made by Twitter management and employees," Zamora added.

After Musk disclosed his purchase of a 9.2 per cent stake in Twitter this week, the platform's CEO Parag Agrawal confirmed Musk would serve as a class II director on the company's board until 2024.

(The above story first appeared on LatestLY on Apr 06, 2022 03:47 PM IST. For more news and updates on politics, world, sports, entertainment and lifestyle, log on to our website latestly.com).