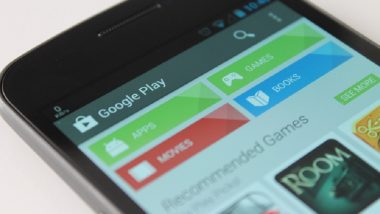 New Delhi, July 11: Tech giant Google has banned 11 applications from its Play Store for injecting malware into users’ phones, reports said. The decision to delist the apps comes after the Joker malware was found in the 11 apps on Google Play Store. Reports informed that Android users who may have any of these apps installed should get them removed at the earliest to prevent future threats. According to reports, a new variant of popular malware Joker was discovered by researchers at cybersecurity firm Check Point.

Check Point, which deals with security solutions, informed that the Joker Malware was found in all these 11 apps following which they were taken down by Google from the Play Store. Google Meet Crosses 10 Crore Downloads Globally on Google Play Store: Report.

The malware Joker is one of the most frequently encountered malware for Android. This is not the first time that Joker malware has made its way to apps on Google Play Store, it has entered the Play Store even in the past. Reports also suggest users to check their mobile and credit-card bills to detect any unknown subscriptions. Earlier, Google had released a report saying that it had detected and removed 1,700 malicious 'Bread' apps from the Google Play Store. These Bread apps are ones with the Joker malware.

(The above story first appeared on LatestLY on Jul 11, 2020 09:39 AM IST. For more news and updates on politics, world, sports, entertainment and lifestyle, log on to our website latestly.com).