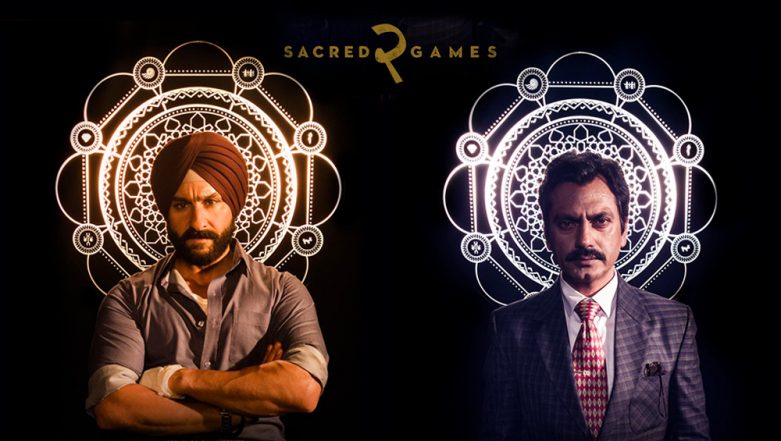 We already know that OnePlus India will be launching the new OnePlus 7 Series in the country on May 14. Ahead of the official launch next week, the Chinese phone maker has collaborated with Netflix, wherein the leading internet entertainment service has officially released two new posters of the forthcoming Sacred Games 2 that are shot on OnePlus 7 Pro. Yes! You heard that right. The new poster images captured demonstrates the real camera capabilities of the upcoming OnePlus 7 Pro. Sacred Games 2 Ties Up With OnePlus India for Character Posters: Check Out Stills of Nawazuddin Siddiqui Aka Ganesh Gaitonde and Saif Ali Khan Aka Sartaj Singh.

As per the press statement issued by Netflix and OnePlus, the HDR+ 10 supported display on the new flagship smartphone will set new benchmarks in mobile content viewing. Moreover, Netflix also gave a sneak peek into the second season of Sacred Games original series by releasing a behind the scene video, which is also reportedly captured on the new OnePlus 7 Pro smartphone. OnePlus 7 Pro Specifications Sheet Again Leaks Online Prior To India Launch.

Jerome Bigio, Director-Partner Marketing, APAC, Netflix stated, "Through incredible devices like the OnePlus 7 Pro, consumers increasingly are able to enjoy an amazing viewing experience on Netflix. We are thrilled to celebrate the epic fandom of Sacred Games with posters and a behind-the-scenes video shot on the OnePlus 7 Pro." OnePlus 7 Pro Flagship Smartphone To Feature HDR10+ Certified Display: Report.

The true masters of the

game. Presenting the official posters of Sacred Games Season 2. Thanks for letting us do this @NetflixIndia #ShotonOnePlus7Pro pic.twitter.com/RZl0gvMwdd

OnePlus 7 Series will be launched in India and other global market simultaneously on May 14 itself. We already know that the Chinese phone maker is expected to launch two smartphones, OnePlus 7 and OnePlus 7 Pro by next week. With just three days left in the arrival of the new OnePlus 7 Series, the phone maker seems to be more focused on the OnePlus 7 Pro which will be packed with pop-up selfie camera and AMOLED display with 90Hz refresh rate. OnePlus 7 Pro: Expected Prices, Launch Date, Pre-Orders, Features, Colours and Specifications - All You Need To Know.

Other highlights will be 6.64-inch Quad HD+ AMOLED screen, Qualcomm Snapdragon 855 SoC, triple rear camera module with 48MP primary sensor and a 16MP pop-up selfie camera. The phone is likely to be backed by a bigger 4,000mAh battery along with 30W Warp Charge support. The exact details and specifications will be revealed at the launch, which is scheduled to happen on May 14. The launch will happen in India at Bangalore International Exhibition Centre at 8:15 PM IST.