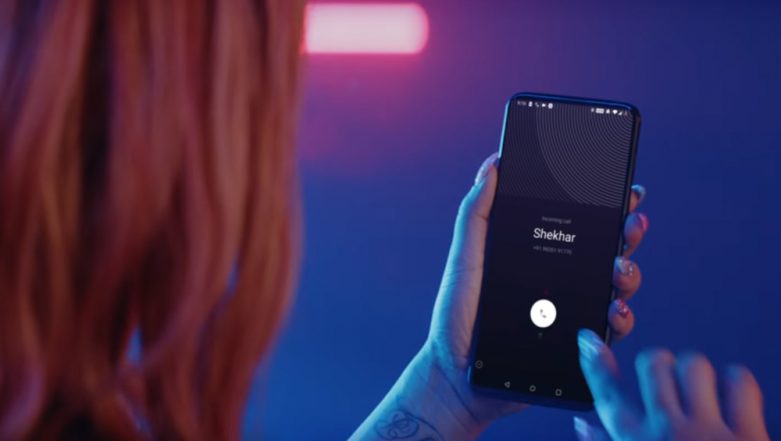 OnePlus India will be eyeing to create new benchmarks with the upcoming OnePlus 7 Series, that is slated to be launched in the country today. The Chinese phone brand will be unveiling the highly anticipated OnePlus 7 and OnePlus 7 Pro smartphones in the Indian market. The company is also hosting launch events of OnePlus 7 Series in London and New York simultaneously. All the rumours and speculations will come to an end as OnePlus reveals its new flagship models. OnePlus 7 Pro Buzz: Netflix Reveals Sacred Games 2 Official Poster Images Captured On OnePlus' Upcoming Smartphone.

Considering the rumours, the top-end version will be called OnePlus 7 Pro whereas the regular model will be dubbed as OnePlus 7. The company has already started pre-orders for the phones that can be done online exclusively via Amazon.in. OnePlus 7 Pro Specifications Sheet Again Leaks Online Prior To India Launch.

Coming to the optics, the main underline of the high-end model will be a pop-up selfie camera and a triple rear cameras. It is important to note that OnePlus 7 Pro will be the first device from the Chinese phone maker to feature the above features. OnePlus 7 Pro Flagship Smartphone To Feature HDR10+ Certified Display: Report.

Our greatest display on our best device ever! Go Beyond Speed with the #OnePlus7Series in 12 hours pic.twitter.com/E5HD3k7qMd

The vertically aligned triple camera at the back will comprise of 48MP, 16MP and 8MP sensors. The phone will also be borrowing in-display fingerprint scanner from OnePlus 6T. The device will be backed with a 4,000mAh battery with 30W Warp Charge support.

On the other hand, the standard OnePlus 7 model will be more of an affordable premium smartphone which will be packed with a 6.41-inch display carrying a waterdrop notch. We won't be seeing a triple rear camera here. The company will be incorporating a dual-rear camera with 48MP lens along with a 5MP depth sensor. OnePlus 7 Pro: Expected Prices, Launch Date, Pre-Orders, Features, Colours and Specifications - All You Need To Know.

Under the hood, both the smartphones will be powered by the latest Snapdragon 855 chipset. The connectivity options on the devices will be taken care by USB Type-C port. The OnePlus 7 is expected to sport slightly bigger battery than OnePlus 6T.