OnePlus 9RT Could Be Launched in India As OnePlus RT: Report

After launching the OnePlus 9RT smartphone in China, the company is planning to introduce the device in the Indian market. A tipster 'Mukul Sharma' has revealed that OnePlus will launch the 9RT device in India with a different name 'OnePlus RT'. 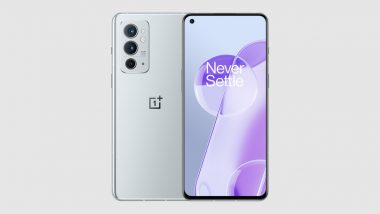 OnePlus, the Chinese tech giant had launched the 9RT smartphone on October 13, 2021, in the home country. Now, the company plans to introduce the device in the Indian market. A known tipster who goes by the name of Mukul Sharma has revealed that OnePlus will launch the 9RT device in India with a different name 'OnePlus RT'. The smartphone has been listed on the Google Supported Devices and Google Play listing websites with a different name. The tipster claims that the handset has been listed with a model number OP5154L1 on the BIS certification, which hints that the company could soon launch the device in India. OnePlus Nord N20 5G Leaked Renders Reveal Triple Rear Cameras & Punch-Hole Display.

OnePlus 9RT comes with a 6.62-inch FHD+ display with a resolution of 2400x1080 pixels. The handset is powered by an octa-core Qualcomm Snapdragon 888 SoC coupled with 12GB of RAM and up to 256GB of internal storage. For photography, it gets a triple rear camera setup comprising a 50MP main camera, a 16MP secondary snapper and a 2MP macro lens. At the front, there is a 16MP snapper for selfies and video calls.

(The above story first appeared on LatestLY on Nov 22, 2021 12:10 PM IST. For more news and updates on politics, world, sports, entertainment and lifestyle, log on to our website latestly.com).