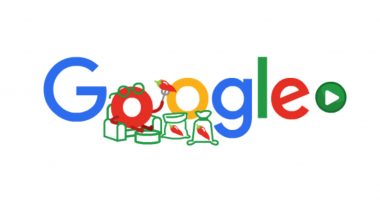 At this moment, so many of us, around the world, are at home, heavily bored, finding ways to keep ourselves occupied. While the battle to contain the spread of novel coronavirus, which has infected people in millions, is on, Google is doing its bit to help you cure boredom by showcasing popular games from the past Doodle, every day. Stay and play at home with popular past Google Doodles bring back the famous games that the tech giant introduced in its doodles. Today’s Google Doodle features 2016 doodle game Scoville, celebrating the American chemist and award-winning researcher, Wilbur Scoville who devised the standard measurement of a pepper’s spiciness. In this Google Doodle game, users are required to throw balls of ice creams to the peppers to tackle the heat of the spice. Popular Google Doodle Games List: Stay and Play Garden Gnomes Game at Home, Here Are Other Past Google Doodles From Cricket to Coding.

Wilbur Lincoln Scoville, was an American pharmacist best known for his creation of the “Scoville Organoleptic Test,” today, standardised as the Scoville Scale. He devised the test in 1912, while working at a pharmaceutical company called Parke-Davis to measure pungency, spiciness or heat of various chilli peppers. Google, remembering him and his work, on his 151st birthday in 2016, introduced the Scoville game for its users. Scoville’s book, The Art of Compounding makes one of the earliest mentions of milk as an antidote for pepper heat. So, the designer thought there was no better way, but create a fun game to tackle spiciness. Google Brings Back Popular Doodle Games! Stay and Play at Home The Best of Popular Google Doodle Game 'Coding'.

The Google Doddle game, Scoville, was designed by artist Olivia Huynh, treats the ice game, a metaphor for cooling off the heat of pepper’s pungency. So, throw the balls of ice cream at the peppers to tackle its spiciness, while you stay at home. It is indeed a fun game to stay occupied, at home.

Google has started the series of these doodle games, last month, with a playable doodle making a comeback every other day. This was done with an aim to keep users engaged during the lockdown, while tacking the spread of the coronavirus. The Google Doodle game series is informative and fun at the same time, keeping users occupied during this time, while they continue to stay at home.

(The above story first appeared on LatestLY on May 04, 2020 08:47 AM IST. For more news and updates on politics, world, sports, entertainment and lifestyle, log on to our website latestly.com).