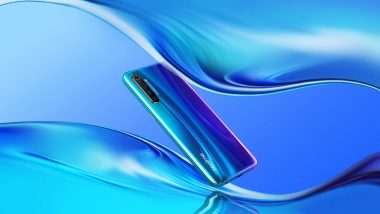 New Delhi, Oct 9: Realme India Chief Executive Officer Madhav Sheth on Wednesday announced that the company's upcoming smartphone Realme X2 Pro will launch in India in December. The device is all set for its global debut on October 15 in Madrid. The smartphone will have dual stereo speakers with Dolby Atmos, the company recently revealed through a tweet posted by its European account. It will also deliver certified Hi-Res sound quality. Realme X2 Pro Smartphone With 90Hz Display & 50W VOOC Fast Charging To Be Launched on October 15: Report.

The X2 Pro will also be Realme's first device to feature a 90Hz display and will come with 50W VOOC fast-charging tech. It will sport a 64MP quad-camera setup on the back.

The quad-camera system will also include a telephoto lens to support 20x hybrid zoom and retain the 8MP ultrawide angle camera, which will let you capture macro shots, but the field of view (FOV) is down from 119 to 115 degrees. The device is also expected to support 50W SuperVOOC Flash Charge technology.

(The above story first appeared on LatestLY on Oct 10, 2019 01:35 PM IST. For more news and updates on politics, world, sports, entertainment and lifestyle, log on to our website latestly.com).