АrctikaM, The Russian Satellite That Will Monitor Climate and Environment in Arctic Region, Successfully Launched by Soyuz-2.1b Carrier Rocket

Russia has successfully launched its first satellite to monitor the Arctic's climate and environment, the country's space corporation Roscosmos said in a statement. 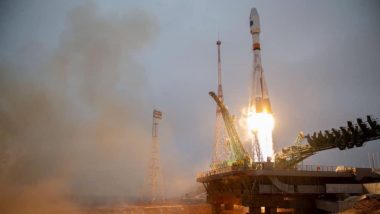 Moscow, March 1: Russia has successfully launched its first satellite to monitor the Arctic's climate and environment, the country's space corporation Roscosmos said in a statement.

A Soyuz-2.1b carrier rocket with the "Arktika-M" satellite on board blasted off from the Baikonur Cosmodrome in Kazakhstan at 9.55 a.m. on Sunday, Roscosmos said.

The Arktika-M spacecraft was delivered to the orbit at 12.14 p.m., Xinhua news agency quoted the space corporation as further saying in the statement. India’s First Space Mission for 2021: PSLV-C51 Rocket Lifts Off With 19 Satellites, PM Narendra Modi’s Photo and Bhagavad Gita From Sriharikota.

The creation of a satellite system in highly elliptical orbits is necessary for information collection to solve operational meteorology and hydrology problems, and monitoring the climate and environment in the Arctic region, it said. NASA Spacewalk: Spacewalking Astronauts Kate Rubins and Victor Glover Prep Station for New Solar Wings (Watch Video).

The Arktika-M will provide round-the-clock continuous monitoring of the northern territory of Russia and the seas of the Arctic Ocean, Roscosmos added.

The satellite will be able to transmit overview images of the Earth's northern polar region and the adjacent areas at least every 15-30 minutes.

(The above story first appeared on LatestLY on Mar 01, 2021 10:45 AM IST. For more news and updates on politics, world, sports, entertainment and lifestyle, log on to our website latestly.com).