Winter Solstice Great Conjunction 2020: How to See the Christmas Star? Quick Tips to Spot Jupiter and Saturn’s Closest Encounter in the Night Sky, First of Its Kind in Nearly 400 Years

A celestial rendezvous will make the event more special—the Great Conjunction 2020 of Jupiter and Saturn. How to spot the astonomical event? In this article, we bring you quick tips referred by scientists so that you can see the Christmas star lighting bright in the night sky. 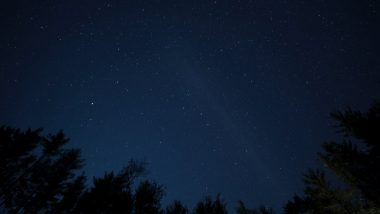 Winter solstice great conjunction 2020: The holiday season is bringing some greatest celestial events as a treat for the skygazers. While you light up the Christmas tree, decorate your house for a virtual treat; nature has its own show. Winter Solstice Great Conjunction 2020 in Northern Hemisphere is today, December 21, which means we will experience the first day of winter. A celestial rendezvous will make the event more special—the Great Conjunction 2020 of Jupiter and Saturn. On the winter solstice, the planets will be at its closest encounter in the sky, for the first time in nearly 400 years. While the astronomical enthusiasts in you are extremely excited about this upcoming event, there are important things you must know. Dubbed as the Christmas Star, you must be wondering as to how you can spot Jupiter and Saturn’s closest encounter in the night sky. In this article, we bring you quick tips referred by scientists so that you can see the Christmas star lighting bright in the night sky. Winter Solstice 2020 and the Great Conjunction Google Doodle: Jupiter, Saturn and Earth, Search Engine Giant’s Adorable Animated Doodle Perfectly Marks the First Day of Winter.

A conjunction occurs when two objects appear close to each other in the sky. The conjunction of Jupiter and Saturn, which only happens about once every 20 years, is called great conjunction. The celestial event on Winter Solstice 2020 is extremely significant because this is the first time in about 397 years when the two planets of our solar system will come this close. This year’s great conjunction also marks the first time in nearly 800 years since the planets aligned at night, and skywatchers were able to witness the celestial occurrence. The two planets are expected to complete merge together, and a carful observer should be able to separate them in the sky with the naked eye.

How to See the Christmas Star?

The winter solstice is the longest night of the year, so this rare coincidence will allow people some more time to go outside and see the solar system. To spot the astronomical event, skywatchers are advised to point their gaze toward an unobstructed part of the southwestern sky, about an hour after the sunset. The planets will set below the horizon quickly. Leading up to the great conjunction, the Saturn will appear slightly above to the left of the Jupiter and eventually the planets will reverse the positions in the night sky. Both the planets are bright, so they can be seen in areas witch clear skies and no cloud cover, which means the event can be seen with the naked eyes. However, astronomers also pointed out that binoculars or a small telescope may allow viewers to see Jupiter’s four large moons and give you a clear view of the event.

Jupiter and Saturn will continue to grace the night sky in the early evenings following December 21. Great conjunction is a rare event, and no one should miss witnessing the celestial occurrence. Let us hope for a clear sky to view the two planets’ closest approach.

(The above story first appeared on LatestLY on Dec 21, 2020 12:38 AM IST. For more news and updates on politics, world, sports, entertainment and lifestyle, log on to our website latestly.com).