A full moon, Geminid and Ursid meteor showers, solar eclipse, winter solstice and also ‘kissing planets,’—yes Jupiter and Saturn are going to ‘kiss’ in the night sky, the end of this year. So, check out your stargazing guide for the month to bid farewell to 2020 with these beautiful celestial events gracing the sky. 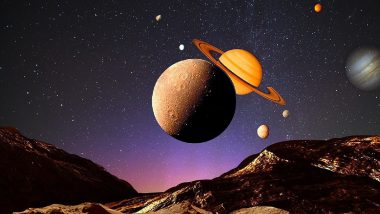 The end of the year is here, and we cannot be thrilled enough. The last month gives us mixed feelings. It is time to gear up for the holiday season, bid farewell to the present year and be hopeful for the coming year, promising ourselves to stick to the New Year resolutions, at least this time. The COVID-19 pandemic may have come in the way of ringing in the New Year in our traditional way; we have amazing celestial events lined up that will make it a lot easier to bid farewell 2020 and to look forward to the coming year. December 2020 brings in a lot of celestial events, and we cannot be thankful enough for that. A full moon, Geminid and Ursid meteor showers, solar eclipse, winter solstice and also ‘kissing planets,’—yes Jupiter and Saturn are going to ‘kiss’ in the night sky, the end of this year. So, check out your stargazing guide for the month to bid goodbye to 2020 with these beautiful celestial events gracing the sky.

If you thought, November’s Leonid meteor shower was the most beautiful one, hold that because this year’s best shooting stars are yet to come. Are you ready for up to 150 multi-coloured shooting stars per hour? We know we are, because that is the possibility on the evening of December 13 and into the early hours of December 14, as planet Earth passes through a stream of dust and debris left in the solar system by an asteroid.

Catch the Geminids meteor shower as the peak coincides with darker skies during a new Moon. Plus, Jupiter and Saturn appear closer than in decades, and the winter solstice arrives. When & where to observe: https://t.co/qRBJtJlP3o pic.twitter.com/Kp9cd9csm4

Geminids are different, and the resulting of shooting stars can be yellow, blue, red and green. It will be visible in both northern and southern hemispheres. Again, there is another meteor shower called Ursids, which is expected to be visible from December 17 to December 26, in the northern hemisphere.

While lunar eclipse occurred a number of times this year, the final one being the Beaver Moon eclipse on November 30, the last solar eclipse is expected to occur in December, 2020. The moon will pass directly in front of the sun, forming a total solar eclipse on December 14, 2020, making this year’s only total solar eclipse. However, the spectacle will only be visible for people in certain regions in the southern hemisphere—South America, especially in Chile and some parts of Argentina. A partial solar eclipse will be visible in Brazil, Paraguay, Uruguay, Peru and Ecuador, as well as in parts of Antarctica and south-westerly parts of Africa, as per Time and Date.

The shortest day of the year in Northern Hemisphere, Winter Solstice is on December 21. The day holds great significance, and it stars the start of the astronomical winter. After the winter solstice, days start becoming longer and nights shorter as spring approaches in the northern hemisphere.

The winter solstice will also welcome what is known as the Great Conjunction or ‘Kissing Planets,’ when two planets in our solar system come closer in the night sky. It is a once-in-a-lifetime view! Jupiter and Saturn will appear to look like a double planet just after the sunset on December 21, as the two celestial bodies will be in conjunction in the event. This will be the closest conjunction of Jupiter and Saturn in 397 years, with the two planets coming within 0.1 degrees of each other.

The full moon of November 2020, brought with it the penumbral lunar eclipse occurrence. And the last full moon of the year, also called the Cold Moon, will take place on December 30. Being so close to the Winter Solstice, the full moon will be surrounded by the darkest sky of any full moon in 2020.

(The above story first appeared on LatestLY on Dec 04, 2020 11:50 AM IST. For more news and updates on politics, world, sports, entertainment and lifestyle, log on to our website latestly.com).