How to Watch Mercury, Mars, Venus, Jupiter, Saturn and Moon on July 19 Without Telescope? Here's Easy Way to Spot Five Planets With Crescent Moon Visible in Sky on Sunday 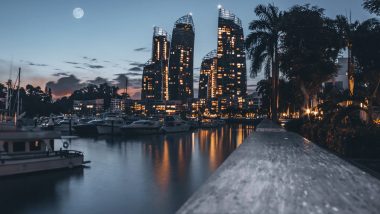 Comet Neowise, is not the only cosmic phenomenon to be visible in the sky this weekend. Sky gazers will have a delightful early morning on Sunday, July 19, 2020. Before the sunrise, as many as five planets—Mercury, Mars, Venus, Jupiter and Saturn—and the crescent moon would be visible in the sky, all at the same time. Yes, and the planets will put up a show for at least about 45, minutes. You can get the glimpse—without even using a telescope. NASA stated the five planets and the moon would be close enough and bright enough to spot with the naked eyes. So, how to see the five planets and the crescent moon in the sky, without using a telescope? In this article, we explain to you so that you can enjoy the show, in the early hours tomorrow. Comet NEOWISE to Be Visible in India From Today For 20 Days: How and Where to Watch The Rare C/2020 F3.

Four of the five planets will appear extremely bright stars. Venus will be visible low in the east-northeast, Mars in the south-southeast and Jupiter and Saturn in the west-southwest. Jeffrey Hunt, an astronomy educator and former planetarium director, explained in his blog, “Find the four bright planets -- Venus, Mars, Saturn and Jupiter. They look like overly bright stars. Brilliant Venus is low in the east-northeast. Mars is the lone 'star' in the southeast, and Jupiter and Saturn are the stars in the southwest. To your eyes, they won't look like the photos made by spacecraft, just overly bright stars.”

How to Spot the Five Planets and the Moon Without Telescope?

Hunt further explains that Uranus, Neptune and Pluto are also in the sky between Venus and Jupiter; however, to see the trio of planets, you will need a telescope.

In case you miss out, know that you will still be able to see the five planets in the sky for a few additional mornings, after July 19. But you won’t see the moon. So, do not forget to set up your alarm clock to view the celestial occurrence.

(The above story first appeared on LatestLY on Jul 18, 2020 11:25 AM IST. For more news and updates on politics, world, sports, entertainment and lifestyle, log on to our website latestly.com).