A new update to the iOS Twitter app is allowing tweets to be shared directly to Instagram Stories.

San Francisco: A new update to the iOS Twitter app is allowing tweets to be shared directly to Instagram Stories. All iOS users can access it by tapping the share icon, which they can find underneath every tweet and then tapping the Instagram Stories option at the bottom of the menu that appears. Twitter To Soon Roll Out Applications for Super Follows and Ticketed Spaces.

In the feature's current iteration, the tweets users share to Instagram end up as non-interactive elements in Stories and they can't tap on one to see it in its original context on Twitter. So, the feature does little to bring people back to Twitter, but it does make the tweets more legible in their final Stories form, the report said. 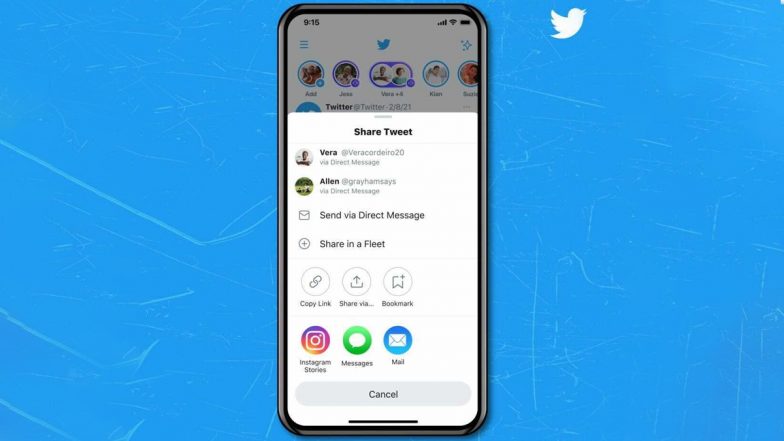 It also means you can avoid clogging your camera roll with screenshots, it added. The micro-blogging site started testing the feature, which allowed users to use the iOS share sheet to add tweets to Instagram Stories at the end of 2020. However, the company is rolling out that tool to all iOS users more than half a year later.

(The above story first appeared on LatestLY on Jun 23, 2021 05:50 PM IST. For more news and updates on politics, world, sports, entertainment and lifestyle, log on to our website latestly.com).