Vivo, the Chinese phone maker, will soon launch the X80 Series. Ahead of its launch, the base variant of the Vivo X80 Series has been reportedly spotted on the Google Play Console. 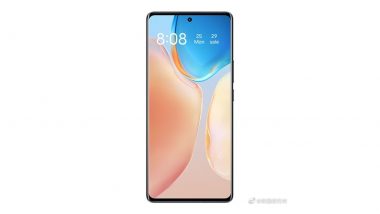 According to the listing, Vivo X80 will be powered by a MediaTek Dimensity 9000 SoC coupled with Mali G70 GPU, 12GB of RAM and up to 256GB of internal storage. The handset will feature curved edges and a centrally placed punch-hole cutout for the selfie camera. The device might get a 6.78-inch FHD+ display with a resolution of 2400x1080 pixels.

The Vivo X80 smartphone is tipped to sport a triple rear camera setup comprising a 50MP Samsung GN5 sensor, a 13MP secondary lens and a 12MP snapper. Upfront, there could be a 44MP selfie camera. Moreover, Vivo X80 is expected to run on Android 12 OS. Apart from this, nothing more is known. We expect the company to release a few teasers before its launch.

(The above story first appeared on LatestLY on Apr 15, 2022 11:13 AM IST. For more news and updates on politics, world, sports, entertainment and lifestyle, log on to our website latestly.com).