Google has announced that WhatsApp's chat history migration feature to transfer messages from iPhones to Android is now coming to Pixel and all other Android 12 smartphones. 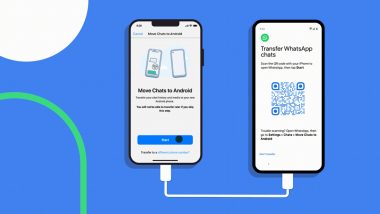 New Delhi: Google has announced that WhatsApp's chat history migration feature to transfer messages from iPhones to Android is now coming to Pixel and all other Android 12 smartphones. This feature is already available on Samsung Galaxy devices but unlike with Samsung phones, where the feature is available on devices running Android 10 and above, here it is limited to phones with Android 12. WhatsApp To Soon Ask Users To Verify Their Identity To Make Payments: Report.

"You can safely transfer your chat history and memories from your WhatsApp account on iPhone to Android. We worked closely with the WhatsApp team to build a new set of capabilities, all designed to make it easier to switch from iPhone to Android and take your WhatsApp history with you," the company said in a statement.

Don’t let your @WhatsApp memories go down in history, take them with you. You can now transfer your data to your #Android phone, all it takes is a USB-C Lightning cable. Learn more: https://t.co/5WKK03tTyC pic.twitter.com/MTrBoFJ1mi

In order to successfully bring WhatsApp chat history from an iPhone to a compatible Android device, one will need a USB-C to Lightning cable. Google says that while setting up Android phone, one will be prompted to scan a QR code with your iPhone, which will let the user start the transfer process.

"Your WhatsApp chat history will simply be copied from your iPhone to your new Android phone, and we'll automatically make sure you don't receive new messages on the old device while the transfer is in progress," the company added.

The feature will be rolling out "slowly" for people on the latest version of the app.

(The above story first appeared on LatestLY on Oct 27, 2021 09:24 AM IST. For more news and updates on politics, world, sports, entertainment and lifestyle, log on to our website latestly.com).