Americans Banned From Entering Into Transactions With Hong Kong Officials 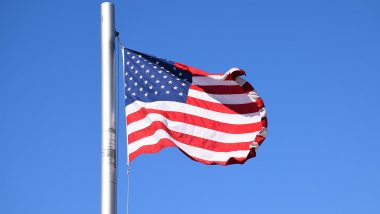 Washington, September 27: The US Treasury Department has announced that under the sanctions imposed over the controversial national security law imposed by Beijing on Hong Kong, no American can enter into transactions with targeted officials of the city and mainland China, it was reported on Sunday. The sanctions were imposed last month by the Department's Office of Foreign Assets Control the city's Chief Executive Carrie Lam and 10 other current and former local and mainland officials, the South China Morning Post (SCMP) newspaper reported. China Sanctions Senators Marco Rubio, Ted Cruz And 9 Others to Counter US Action on Hong Kong.

The move blocked the individuals' US-based assets and prohibited American citizens and businesses from dealing with them in general. In a statement posted on its webpage on Saturday, the department specified that its citizens were prohibited from transactions with the named officials. Regarding the US' move, a city government spokesman said it would not comment on the particulars of the order. China Imposes 'Reciprocal' Restrictions on US Diplomats in Mainland And Hong Kong.

"The statement is for Americans... The Hong Kong government has said that the so-called sanctions were groundless. It was the US that was violently interfering with our internal affairs," the SCMP newspaper quoted the spokesman as saying. "The city officials affected will not be intimidated. They will continue to perform their duties in safeguarding national security," he added.

(The above story first appeared on LatestLY on Sep 27, 2020 03:39 PM IST. For more news and updates on politics, world, sports, entertainment and lifestyle, log on to our website latestly.com).