As Masood Azhar's Health Deteriorates, His Brother Takes Over Reins of Jaish-e-Mohammed 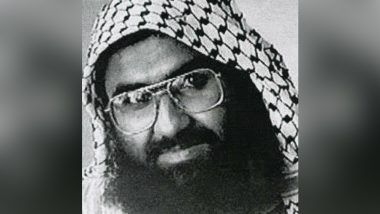 New Delhi, September 10: As the health condition of Jaish-e-Mohammed (JeM) chief Masood Azhar continues to deteriorate, his brother Abdul Rauf Asghar has taken over the reins of the terror outfit. Masood Azhar, who is suffering from renal failure, has been bed-ridden for months. He went underground after the Indian Air Force (IAF) conducted airstrikes on JeM's biggest training camp near Balakot deep inside Pakistan in February. Masood Azhar Secretly Released From Jail, Pakistan Planning to Use JeM For Terror Attacks, Warns Intelligence.

"Masood Azhar is too unwell to oversee day-to-day operations of Jaish-e-Mohammed. His confinement to a well-guarded Jaish facility in Bahawalpur is possibly linked to his serious medical condition and the need to ensure his security in the aftermath of the IAF airstrikes on Jaish terror camp in Balakot in February," an intelligence functionary was quoted by TOI as saying. In Azhar's absence, his brother Abdul Rauf Asghar is supervising operations of JeM. 'Jaish Training Recruits For Underwater Attack, Indian Navy on High Alert'.

Asghar, who was the brain behind the IC-814 hijacking which had secured the release of Azhar and other terrorists, has been involved in operations of JeM since its inception. The 45-year-old, delivers Friday sermons like Azhar, to radicalise youths and organises the resources for the terror outfit and oversees their execution. "Asghar is the real man to watch out for," an officer of the Indian security establishment said.

"He meets other Jaish functionaries regularly to plan terror manoeuvres. In fact, recent reports indicate that he has been instructed by ISI to escalate Jaish activities in J&K and beyond in view of abrogation of Article 370," the officer added. Pakistan's interior ministry named Asghar under-observation members of proscribed organisations and took him into custody in March this year.

Azhar is accused of several deadly terrorist attacks in India, including one on the Uri military base in Kashmir in 2016 in which 17 security personnel were killed. He was also involved in the 2001 attack on Parliament and the 2005 attack in Ayodhya. His JeM has already been in the UN's list of banned terror outfits. India has declared Azhar as individual terrorists by the government under a new anti-terror law.

(The above story first appeared on LatestLY on Sep 10, 2019 09:11 AM IST. For more news and updates on politics, world, sports, entertainment and lifestyle, log on to our website latestly.com).