Coronavirus Outbreak in US: Donald Trump Urges Countrymen Against Hoarding of Essential Items 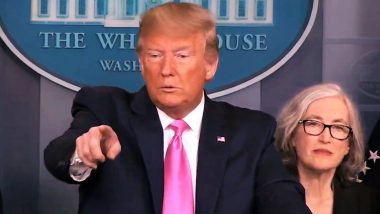 Washington, March 16: US President Donald Trump has advised his countrymen against hoarding of essential items as reports of grocery stores being swept by panic buying due to the coronavirus crisis emerged, saying supply chains in the country are the most powerful in the world and there is no shortage of daily goods.

The US mainstream media, including newspapers and channels, on Sunday showed pictures and visuals of empty shelves in grocery stores in the country.

Visuals of lockdown-like situation in several European countries like Italy and Spain added to the anxiety of the Americans who bought things to fill up their pantry with weeks of stocks. ‘Coronavirus Can Be Treated With Paracetamol, Bleaching Powder Will Kill COVID-19,’ Says Andhra Pradesh CM Jaganmohan Reddy, Netizens Make Memes and Jokes on Viral Video.

In view of the situation, Trump on Sunday held a meeting with top leaders of the companies that own grocery stores, including Indian-American Vivek Sankaran, who is president and CEO of Albertsons.

“But you don't have to buy so much. Take it easy. Just relax. People are going in and they're buying more. I remember -- I guess, during the conversation, Doug of Walmart said that they're buying more than they buy at Christmas. Relax. We're doing great. It all will pass,” he said.

The White House said that the supply chains in the country were strong and it was unnecessary for citizens to hoard daily essentials. Among other prominent corporate leaders in the meeting were Dave Clark from Whole Foods; Mark Clouse of Campbell Soup Company; Brian Cornell of Target; Kevin Hourican of Sysco; Craig Jelinek of Costco; Donnie King of Tyson Foods; David MacLennan of Cargill; and Doug McMillon of Walmart. Referring to his meeting with corporate leaders, Trump said they assured him that they are going to meet the demands of the public.

“They're going around the clock, if they have to. They are committed to the communities where they're serving and which they serve so beautifully and have for a long time. And they're buying a lot of additional things to sell,” he said. Coronavirus Self-Distancing Satire Memes Go Viral and They Are Too Relatable if You Are Isolating Yourselves to Prevent Catching COVID-19.

“But again, they actually have asked me to say- Could you buy a little bit less, please?- I thought I'd never hear that from a retailer. All of them are working hand-in-hand with the federal government, as well as the state and local leaders, to ensure food and essentials are constantly available. And they'll do it,” he said.

“There's no shortages. We have no shortages -- other than people are buying anywhere from three to five times what they would normally buy. It's going to be there for a long time,” Trump said.

Asserting that the supply chains in America are the most powerful in the world, and they're all working very hard, he said that the stores are stocking up at a level that's beyond the Christmas rush.

“There's no need for anybody in the country to hoard essential food supplies. They said to me- Could you please tell them just go and buy, enjoy it. Have a nice dinner. Relax. Because there's plenty. But you don't have to buy the quantities because it's hard to refill the stores on a basis as rapid as they're refilling them,” Trump said.

According to the World Health Organisation data, the COVID-19 pandemic has infected 3,777 people and claimed 69 lives in the country. The deadly virus, which originated in China, has claimed over 6,500 lives and infected more than 169,000 people over 135 countries and territories.