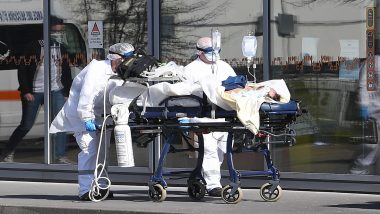 London, September 19: With the pace of coronavirus transmission rapidly rising in the United Kingdom, the country's top epidemiologist has issued a warning to the government. Professor Neil Ferguson, who was earlier part of the government's Scientific Advisory Group for Emergencies, said the UK is "facing a perfect storm" since the easing of curbs over the summer season. Can You Get Coronavirus Twice? 27-Year-Old Bengaluru Woman, Who Recovered From COVID-19 in July, Tests Positive Again.

Speaking to reporters, Ferguson claimed that the current COVID-19 infection rate in the UK is similar to what it was in February this year. In the next couple of weeks - if tough measures are not enacted - the daily count of infections and fatalities would peak to "mid-March level", he warned.

The UK is already preparing for more than 100 deaths a day in the next few days. If the transmission rate peaks to mid-March level, as warned by Ferguson, the country may end up recording 600-800 deaths a day along with nearly 10,000 daily infections.

On Friday, the COVID-19 curve rose sharply as over 4,000 persons were tested positive for the contagious disease. This had prompted Prime Minister Boris Johnson to contend that the UK is entering into a "second wave" of the pandemic.

"When you look at what is happening, you’ve got to wonder whether we need to go further than the rule of six that we brought in on Monday. We’ll be looking at the local lockdowns we’ve got in large parts of the country now, and see what we can do to intensify things," Johnson said.

By "rule of six", he referred to the restrictions that bar pubs and restaurants to operate. Only takeaways are permitted as all forms of gathering will remain banned. A group of more than six people are not allowed to gather.

Families have also been ordered to not to mix up or organise get-together till the threat subsides. Schools, however, will continue to remain functional till a total lockdown is imposed, Johnson clarified.

According to Ferguson, stricter norms are needed in order to prevent the virus transmission rate from further accelerating. "I think some additional measures are likely to be needed sooner rather than later," he said.

(The above story first appeared on LatestLY on Sep 19, 2020 04:12 PM IST. For more news and updates on politics, world, sports, entertainment and lifestyle, log on to our website latestly.com).