Tesla and SpaceX CEO has once again denied any links with convicted paedophile Jeffrey Epstein's alleged accomplice Ghislaine Maxwell after a photo of him with Maxwell went viral on social media. 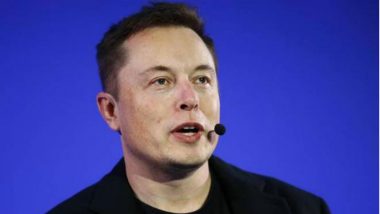 San Francisco, July 5: Tesla and SpaceX CEO has once again denied any links with convicted paedophile Jeffrey Epstein's alleged accomplice Ghislaine Maxwell after a photo of him with Maxwell went viral on social media.

The photo was taken at a 2014 Vanity Fair party where Musk and British socialite Maxwell, 58, who was arrested and charged with multiple counts of child sex trafficking, were seen together.

Writer Leigh Alexander tweeted on Saturday along with tagging the photo: "Who's your friend? You look like you're having fun".

Musk hit back: "I was at that Vanity Fair party with @TalulahRiley. Don't know Ghislaine. Real question is why did VF (Vanity Fair) invite her?"

Alexander further tweeted: "She was on a huge press tour; I've even met her and I work in a niche. Why would you throw your weight at her? Is it her fault you associated with these people?"

Musk has also denied reports that Epstein once toured his SpaceX facility.

"To the best our knowledge, he never toured SpaceX. Don't know where that comes from", tweeted Musk to a user who asked the question.

In a statement to Vanity Fair last year, the Tesla CEO distanced himself from Epstein, who he said was "obviously a creep".

Maxwell, an ex-girlfriend of Epstein, is facing charges in the US after being arrested by the FBI on Friday.

She is accused of assisting Epstein's abuse of minors by helping to recruit and groom victims known to be underage.

Maxwell has previously denied any involvement in or knowledge of Epstein's alleged sexual misconduct.

Epstein died in prison on August 10 last year as he awaited, without the chance of bail, his trial on sex trafficking charges.

He was arrested in New York following allegations that he was running a network of underage girls - some as young as 14 - for sex. His death was determined to be suicide.

Prosecutors allege that between 1994 and 1997, Maxwell helped Epstein groom girls as young as 14.

(The above story first appeared on LatestLY on Jul 05, 2020 11:07 AM IST. For more news and updates on politics, world, sports, entertainment and lifestyle, log on to our website latestly.com).