‘Go to India or Somewhere, to America': Philippines President Rodrigo Duterte to Those Who Don't Want to Get COVID-19 Vaccine

Warning that the second wave of the pandemic would be disastrous for the Philippines, President Rodrigo Duterte has threatened to arrest the Filipinos who don't want to get vaccinated against COVID-19 and asked them to leave and "go to India if you want or somewhere, to America." 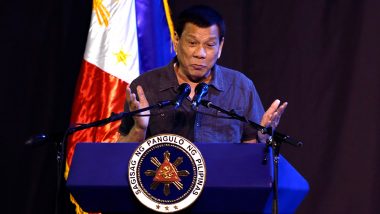 Singapore, Jun 22: Warning that the second wave of the pandemic would be disastrous for the Philippines, President Rodrigo Duterte has threatened to arrest the Filipinos who don't want to get vaccinated against COVID-19 and asked them to leave and "go to India if you want or somewhere, to America."

Speaking during a pre-recorded televised public address on Monday, Duterte said that the country is facing a national emergency and "we must triple our efforts" to contain the virus, according to media reports from Manila.

“Don't get me wrong. There is a crisis being faced in this country. There is a national emergency. If you don't want to get vaccinated, I will have you arrested. And I will inject the vaccine in your butt. You are pests. We are already suffering and you're adding to the burden,” Duterte was quoted as saying by INQUIRER.NET. Wuhan Lab, Suspected of Leaking Coronavirus, Nominated for Top Science Award in China, 'Bat Woman' Dr Shi Zhengli Receives Special Mention.

“So all you Filipinos listening, watch out. Don't force my hand into it… I have a strong arm for that. Nobody likes it. But if you won't get vaccinated, leave the Philippines. Go to India if you want or somewhere — to America. But as long as you are here and you are a human being that can carry the virus, get yourself vaccinated,” Duterte, known for his flamboyant and controversial remarks, said.

The Philippines is one of the worst-hit countries in South East Asia with more than one million cases and over 20,000 deaths linked to COVID-19.

According to studies cited in local media, more than half of Filipinos are unwilling to get vaccinated against COVID-19 over fears the shots are not safe.

The President said that the unvaccinated people are carriers of the virus as they can travel and contaminate other people.

He also threatened to order the authorities to list people who would refuse to get vaccinated.

Expressing concern over the Delta variant, which was first identified in India, Duterte said that it is an "aggressive infection that poses a very grave danger."

He ordered mandatory wearing of face shields both indoors and outdoors, saying it is a "small inconvenience" that can avert a "disaster" as the country cannot afford a second wave of the pandemic, a report in the philstar.com said.

"The first wave (of the pandemic) really depleted the resources of the government. Now, another one would be disastrous for this country. That is why the stricter you are, the better," he said during the address.

"I said that we must triple our effort...we cannot afford a second wave because it might be far worse than the first, and then we will have a problem (with) our economy, and I said it would be a disaster for the country," he added.

As of June 20, Philippine authorities had fully vaccinated 2.1 million people, making slow progress toward the government's target to immunize up to 70 million people in the country of 110 million this year.

Duterte, who has been criticised for his tough approach to containing the virus, also stood by his decision not to let schools reopen, CNN reported.

The government is banking on achieving herd immunity through COVID-19 vaccination so that the economy could be restarted but not all Filipinos have confidence in the vaccines, according to the INQUIRER.NET report.

A Social Weather Stations (SWS) survey last year showed that only 66 per cent were willing to be vaccinated against COVID-19.

The percentage went down in a more recent SWS survey with only 32 per cent of respondents saying they would be willing to be vaccinated, it said.

According to Johns Hopkins University coronavirus data, the Philippines has reported 1,364,239 COVID-19 cases and 23,749 deaths.

Duterte, who after winning the presidency in 2016, unleashed an anti-narcotics campaign in which thousands have died. Human rights groups say authorities in the Philippines have summarily executed drug suspects, but Duterte maintained those killed had violently resisted arrest.

In the same address, Duterte took a swipe at the International Criminal Court, after an ICC prosecutor had sought permission from the court for a full inquiry into the drug war killings in the Philippines.