Harjot Singh, Indian Student Injured in Kyiv Firing to be Brought Back to Delhi on Monday

An Indian student, who was left injured after being allegedly shot with a bullet in Ukraine's capital Kiev, is set to return to India on Monday, Union Minister V.K. Singh said on Sunday. 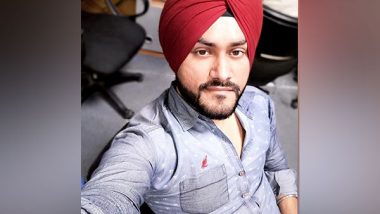 New Delhi, March 6: An Indian student, who was left injured after being allegedly shot with a bullet in Ukraine's capital Kiev, is set to return to India on Monday, Union Minister V.K. Singh said on Sunday.

V.K. Singh is currently in Poland to ensure the safe return of Indian nationals trapped amid the Ukraine-Russia war. Russia-Ukraine War: All Indian Students Evacuated From Pisochyn

The Union Minister in a tweet said, "Harjot Singh is an Indian student who was allegedly shot during the war in Kiev. He also lost his passport during the firing. I am glad to inform you that he will return to India with me on Monday. Hope he has a speedy recovery soon with home made food and care."

Harjot Singh, a Delhi resident, was trying to return to India along with his friends during the ongoing war between Ukraine and Russia. Due to lack of space in the train, he booked a cab to reach the Poland border, but on his way he was suddenly stopped and asked to return back to Ukraine.  Indian Student’s Birthday Celebration at Camp on Romanian Border (See Pics)

As soon as the cab driver took a u-turn, shelling started. Amid this firing, Harjot Singh was shot and was left injured. He lost his passport during the incident.

The Indian government acted swiftly as soon as they received information about the incident. Following this, immediate arrangements were made for his treatment by the Indian embassy.

The Indian government has started 'Operation Ganga' programme to rescue the Indians nationals stranded in Ukraine.

(The above story first appeared on LatestLY on Mar 06, 2022 09:26 PM IST. For more news and updates on politics, world, sports, entertainment and lifestyle, log on to our website latestly.com).