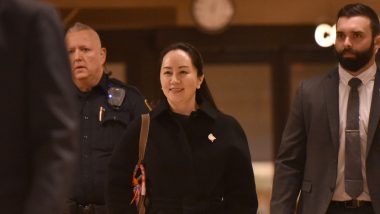 Ottawa, May 27: A Canadian judge will deliver a key decision Wednesday on the extradition of Huawei executive Meng Wanzhou that could set her free and help repair Canada-China relations.

Four days of legal arguments in January focused on whether US charges against the "Huawei Princess" would stand up in Canada, a key test for extradition.

Prosecutors accused her of committing fraud by lying to a US bank, which is a crime in both Canada and the United States.

But defense lawyers say the case hinges on violations of US sanctions against Iran, which Canada and other US allies have repudiated.

A verdict in Meng's favor would throw a wrench into the US prosecution of China's top tech firm for the alleged fraud as well as theft of trade secrets from American companies.

Otherwise, Meng's case would continue on to a second phase in June, followed by more hearings in September.

If she is discharged, the Crown would have 30 days to appeal British Columbia Supreme Court Justice Heather Holmes's ruling on the so-called double criminality test.

But Meng would likely not have to stick around for an appeal to play out, said extradition lawyer Gary Botting.

"She'd be smart to leave the country," he told AFP.

On Saturday, Meng took a premature victory lap, giving a thumbs up as she posed for pictures with family and friends on the steps of the Vancouver courthouse. Chinese Media Condemns Arrest of Huawei’s Top Official Meng Wanzhou, Calls It a ‘Despicable Rogue’ Action.

The eldest daughter of Huawei founder Ren Zhengfei was arrested in December 2018 during a flight stopover in Vancouver on a US warrant.

Beijing has signalled that her repatriation is a precondition for improved bilateral ties and its release of two Canadians detained on espionage suspicions.

The arrests of former Canadian diplomat Michael Kovrig and businessman Michael Spavor nine days after Meng was taken into custody have been widely decried as retribution.

While Meng is out on bail, the two Canadians remain in China's opaque penal system.

China has also blocked billions of dollars' worth of Canadian agricultural exports.

Authorities allege that Meng lied to the HSBC bank about Huawei's relationship with its Iran-based affiliate Skycom, putting the bank at risk of violating US sanctions.

Lawyers for Canada's attorney general on behalf of the US Justice Department pointed to a 2013 presentation in Hong Kong in which she told HSBC executives that Huawei no longer owned Skycom and that she had resigned from its board.

The Crown called this a deception, asserting that Huawei controlled the operations of Skycom in Iran and held its purse strings.

"Fraud is at the heart of this case," Crown counsel Robert Frater told the court.

"Lying to a bank to obtain financial services is fraud," he said.

Defense lawyer Eric Gottardi countered that Meng's misrepresentations -- if they occurred -- do not amount to fraud, and that Canada had rejected the US sanctions against Iran "that ground the accusations in this case."

He also accused the US of abusing its treaty with Canada by asking it to arrest Meng as part of a campaign against China's largest international company.

He renewed demands "for the Canadian side to correct its mistakes and release Ms. Meng immediately and ensure that she returns to China safely, to avoid causing more damage to Canada and China relations."

Prime Minister Justin Trudeau has insisted on leaving it to the courts to decide Meng's fate.

He lamented last week that communist-led China "doesn't seem to understand" the meaning of an independent judiciary.

A US indictment unsealed in New York in February, meanwhile, further alleged Huawei and its proxies conspired "to misappropriate intellectual property" from six US firms as part of a strategy to grow and become the world's largest telecom equipment maker.

It named Shenzhen-based Huawei and several subsidiaries, as well as Meng -- the company's chief financial officer.

Huawei has said the charges are "unfounded and unfair," and part of a ploy to crush the company.

They were laid amid heightened US-China trade tensions and efforts by Washington to keep Huawei from obtaining contracts for 5G, or fifth-generation wireless networks.

That pressure has had mixed results, however, with the EU in January limiting its exposure to "high risk" suppliers of 5G equipment when building next-generation mobile networks, but stopping short of banning any one vendor outright.

Canada has yet to announce a 5G decision.

(The above story first appeared on LatestLY on May 27, 2020 12:37 PM IST. For more news and updates on politics, world, sports, entertainment and lifestyle, log on to our website latestly.com).