Is A U.S.-led Strike Over Syria Imminent, As Airlines Warned Of Flying over East Mediterranean? 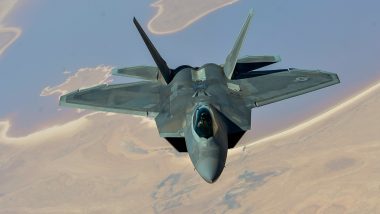 A U.S. Air Force F-22, during a mission in support of Operation Inherent Resolve, a component of the Global Strike Task Force, supporting U.S. and Coalition forces in Iraq and Syria. (U.S. Air Force photo by Staff Sgt. Michael Battles)

The Trump administration officials consulted with global allies today on a possible joint military response to Syria's alleged poison gas attack in the town of Douma. President Donald Trump also cancelled a foreign trip to Latin America in order to manage the crisis that is testing his vow to stand up to Syrian President Bashar Al-Assad as well as an end to U.S. forces' operation after defeating ISIS.

Trump spoke with other world leaders, and U.S. officials said the U.S., France and Britain were in extensive consultations about launching a military strike as early as the end of this week. None of the three countries' leaders had made a firm decision, according to the officials, who were not authorized to discuss military planning by name.

A joint military operation, possibly with France rather than the U.S. in the lead, could send a message of international unity about enforcing the prohibitions on chemical weapons and counter Syria's political and military support from Russia and Iran. President Emmanuel Macron said France, the U.S. and Britain will decide how to respond in the coming days. He called for a "strong and joint response" to the attack in the Syrian town of Douma on Saturday, which Syrian activists and rescuers say killed 40 people. The Syrian government denies responsibility.

The French president does not need parliamentary permission to launch a military operation. France is already involved in the U.S-led coalition created in 2014 to fight the Islamic State group in Syria and Iraq.

UK's Daily Star said that reports of an imminent deadly show of force from U.S. President Trump come after Syrian commentator Danny Makki tweeted that aircraft were spotted over the country.  He said: “Heavy flight of U.S. and coalition aircraft over Syria – Iraq border at present. “Almost everyone I know in Damascus is up and waiting for news on possible U.S. strikes, you can cut the tension with a knife.”

Hours later Reuters News Agency has reported that pan-European air traffic control agency Eurocontrol warned airlines to exercise caution in the eastern Mediterranean Sea due to the possible launch of air strikes into Syria in the next 72 hours. Eurocontrol said that air-to-ground and/or cruise missiles could be used within that period and there was a possibility of intermittent disruption of radio navigation equipment.

"Due consideration needs to be taken when planning flight operations in the Eastern Mediterranean/Nicosia FIR area," the agency said on its website in reference to designated areas of airspace, without specifying the origin of any potential threat. Eurocontrol's warning cited a document from the European Aviation Safety Agency, Europe's safety regulator, a copy of which was not immediately available.

Trump suggested yesterday he had little doubt that Syrian government forces were to blame for what he said was a chemical attack and promised a 'big price to pay' within the next '24 to 48 hours.'

U.S. Officials are however urging caution as the administration does not have incontrovertible evidence at hand of the chemical attack as the video evidence has come only through rescue activists on the ground in Syria. This is in contrast to an incident one year ago in which U.S. intelligence agencies had video and other evidence of certain aspects of the actual attack, which involved the use of Sarin gas. Trump responded by launching Navy cruise missiles at a Syrian airfield which had caused lasting damage to the Syrian regime's airforce infrastructure.

(The above story first appeared on LatestLY on Apr 11, 2018 09:21 AM IST. For more news and updates on politics, world, sports, entertainment and lifestyle, log on to our website latestly.com).