Italy Relaxes COVID-19 Restrictions in Many Parts After Situation Improves

After noticing significant improvement in the pandemic situation Italy eases COVID restriction in many parts of the country. Areas with medium risk Sicily, Sardinia, Apulia, Umbria, and the autonomous province of Bolzano remained in the restricted zone. 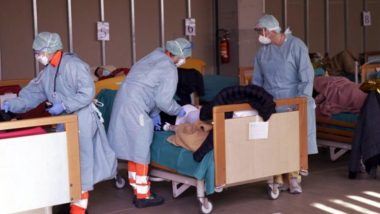 Rome, Feb 2 Coronavirus restrictions have been eased in most of Italy's 20 regions after the country witnessed continued improvement in the pandemic situation.

Only Sicily, Sardinia, Apulia, Umbria, and the autonomous province of Bolzano remained in the so-called "orange zone" -- meaning they were still facing a medium risk of the contagion, reports Xinhua news agency.

All the other regions turned yellow on Monday, which allowed restaurants, bars, and other eateries to resume their activities indoors up to 6 p.m.

No area in the country was currently in the red zone.

A three-tier system of red, orange, or yellow zones implemented since November 2020 denotes high, medium, or low risk, respectively according to the rate of virus transmission and the state of local hospitals.

Despite the positive development, a national curfew from 10 p.m. to 5 a.m. will remain in place across the country, as well as a ban on inter-regional travels but for proven work, health, or emergency reasons. Italy Reports Highest Single-Day Spike of 993 COVID-19 Deaths; Coronavirus Fatality-Toll Reaches 58,038.

In the yellow regions, kindergartens and schools of all grades fully reopened on Monday, with 70 to 75 percent students allowed to attend classes in their classrooms, and the rest following through remote learning.

Also, museums and art exhibitions were also allowed to reopen on Monday, provided that they were able to comply with social distancing and all other sanitary rules.

The decision to reduce the tight anti-pandemic measures resulted from the latest epidemiological survey unveiled by the National Health Institute (ISS) on January 30.

The survey showed a reproduction rate at 0.84 in the period under monitoring (up to January 24). That means one infected person spread the virus to less than one other person during that time.

ISS experts however, noted that the pandemic situation in other European countries was worsening and therefore "a new quick increase in the number of cases in the coming weeks is possible".

As of Tuesday morning, Italy's coronavirus caseload increased to 2,560,957, after 7,925 additional infections were registered in the last 24 hours, according to the Health Ministry.

So far, over 2 million people in Italy have been administered one of the two authorised coronavirus vaccines.

(The above story first appeared on LatestLY on Feb 02, 2021 06:17 PM IST. For more news and updates on politics, world, sports, entertainment and lifestyle, log on to our website latestly.com).