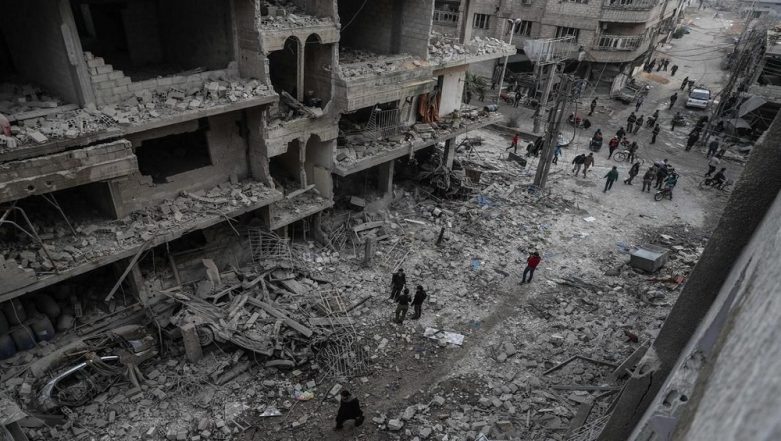 Despite a United Nations Security Council resolution calling for a ceasefire in the Eastern Ghouta region of Syria, Bashar Al-Assad’s government led forces have continued their air strikes and bombardment of the area leading to at least 600 dead in a span of ten days. The death toll gets added to the already ugly figure of more than 4,65,000 dead in the six years of Syria’s civil war.

However, the civil war is not just between Assad and those fighting to overthrow his regime. The Syrian civil war has become a proxy war for global and regional powers to take sides and afflict incremental damage to long-considered foes. In this proxy war, the collateral damage are but of course the civilians of Syria.

The spread and intensification of fighting has led to a dire humanitarian crisis, with 6.1 million internally displaced people and 4.8 million seeking refuge abroad, according to the UN Office for the Coordination of Humanitarian Affairs. By mid-2016, an estimated 1 million people were living in besieged areas and denied life-saving assistance and humanitarian aid. More than 117,000 have been detained or disappeared since 2011, the vast majority by government forces, including 4,557 between January and June 2016, according to the Syrian Network for Human Rights.

The devastation of Syria has been flashed across our televisions screens and the spread of social media means that those persecuted are broadcasting their helplessness to the world. Various agencies including international media have concluded that there are not enough words to describe the savagery of Syria’s crisis. But is that true? Yes, it is true that Syrians are suffering untold misery but if one was to go back in history then Syria is following the pattern of other proxy wars that were fought in the time of Cold War. And no, the casualties seen in Syria have not yet come close to the devastation of civilian populations that have been wrecked by previous proxy wars between the U.S. and USSR (Russian government's political predecessor).

The Cold War is generally accepted as the period between 1947 to 1991, marked by the rise in mistrust between the Soviet Union and the U.S. at the end of World War II and marked by the end of Soviet Occupation of Afghanistan.

The U.S. and USSR (and its successor the Russian government) have never faced each other in a conventional war yet they are considered each other’s greatest adversary for more than 70 years. These decades saw the two superpowers engage in proxy wars spanning the globe, each supporting movements and wars to support their political ideology. A look at the four most devastating proxy wars fought:

The most recent proxy war goes back to the late 1980s, of the Soviet invasion of Afghanistan. The USSR invaded Afghanistan to support the country’s communist government against anti-communist Muslim guerillas. As the communist government in Afghanistan prosecuted and purged forces against it, the U.S. began to arm these guerilla fighters with the help of Pakistan. This was the creation of the Afghan Mujahideen fighters that fought against Soviet forces for ten long years. These years saw at least 15,000 troops being killed in battle and over 1.5 million civilians become casualties of war. As in Syria, the war led to a massive displacement of Afghans with 2.8 million Afghans fleeing to Pakistan, and another 1.5 million moving to Iran.

The North Vietnam was supported by USSR and China through funds, weapons and resources to fight against the South and the U.S. The U.S. lost 58,200 men in the Vietnam War. It was only in 1995 that the Vietnam government released the number of war casualties. As many as two million civilians on both sides were killed, along with an estimated 1.1 million fighters.

The United Nations, with the United States as the principal participant, joined the war on the side of the South Koreans, and the People’s Republic of China came to North Korea’s aid. After more than a million combat casualties had been suffered on both sides, the fighting ended in July 1953 with Korea still divided into two hostile states.

The Greek Civil War was fought in Greece between the Greek government army and the Democratic Army of Greece (DSE, the military branch of the Greek Communist Party (KKE), backed by Yugoslavia and Albania as well as by Bulgaria), and considered the first proxy war of the Cold War era. The U.S. inherited the Greek War from its ally the UK which supported the return of the King of Greece to power after the end of the WWII as opposed to the communist government which had popular support for fighting against Nazi forces during the second World War.

The cost of the Greek Civil War was enormous. As many as 158,000 Greeks lost their lives and hundreds of thousands lost their homes and all they owned. Greek army losses were almost 11,000 killed, while an estimated 38,000 Communist guerrillas were killed.

As shown by history and previous conflicts, what is now taking place in Syria is a return to the days of the Cold War with capitalist and communist forces on opposing sides, the dangerous addition of religious considerations and facetious consideration given to the lives of millions of innocents caught in the power struggle.