The French presidency on Saturday shared videos of the fighter planes taking off following US President Donald Trump's announcement of air strikes against Syria. 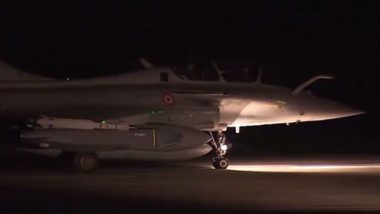 Picture of the Rafale ready to go for joint attack on Syria. (Photo Credit: Twitter/@Elysee)

France, April 14: Videos of Rafale war planes taking off have gone viral on Twitter after the French presidency on Saturday shared videos of the fighter planes taking off following US President Donald Trump's announcement of air strikes against Syria. Last week, a suspected chemical attack killed several people including children, apparently at the behest of Mr. Assad. President Donald Trump had called the attacks "mindless" and even called the Syria President as "Animal Assad". According to The Atlantic, The White Helmets, a voluntary aide group, pinned the blame for the assault, which claimed more than 40 civilian lives, on the Syrian President Bashar al-Assad's regime. However, the regime has rejected the claim, calling it a "fabrication" by Jaish al-Islam, the Islamist group controlling the area. Russia, which has backed Assad throughout the seven-year-long civil war, rejected the claim too. The French presidency on it's Twitter account has shared videos of the Rafale Jets getting ready to launch attack on Syria in a joint operation:

United States President Donald Trump had taken to Twitter to vent out his exasperation over the attacks, criticising the Russian President Vladimir Putin and Iran for backing 'Animal Assad'. "Many dead, including women and children, in mindless CHEMICAL attack in Syria. Area of atrocity is in lockdown and encircled by Syrian Army, making it completely inaccessible to outside world. President Putin, Russia and Iran are responsible for backing Animal Assad. Big price to pay. Open area immediately for medical help and verification. Another humanitarian disaster for no reason whatsoever. SICK!" tweeted the 45th POTUS. His "Big Price to Pay" comment in the tweet seems to be coming true now as US, UK and France launch joint attacks on Syria over their use of chemical weapon in attacking the rebels. (With Agency Inputs)

(The above story first appeared on LatestLY on Apr 14, 2018 01:53 PM IST. For more news and updates on politics, world, sports, entertainment and lifestyle, log on to our website latestly.com).