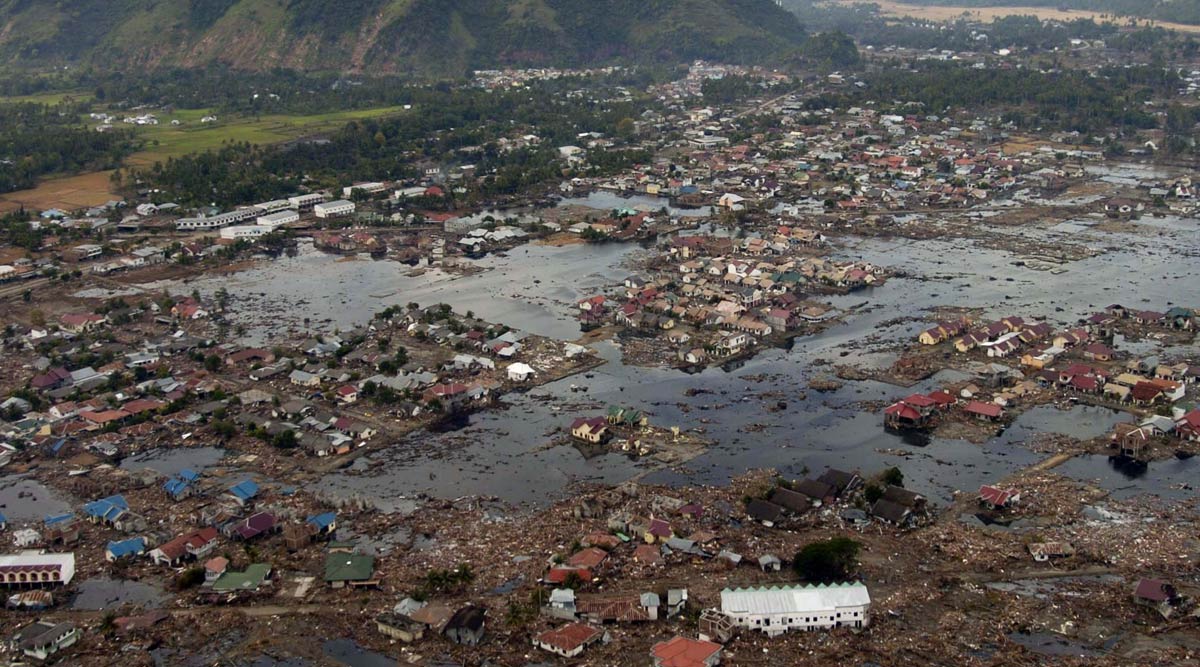 It has been 15 years, but the painful memories remain afresh. It was an early Sunday morning in Indonesia. Tourists and locals were out in their thousands. Suddenly, the white sand disappeared, busy streets were engulfed, and active torrents twisted boats and vehicles. The 2004 Indian Ocean earthquake and tsunami occurred at 00:58:53 UTC on December 26. The colossal quake triggered a massive tsunami across the Indian Ocean. Reportedly, 230,000 people across 14 countries were killed in Asia, and it became one of the world’s deadliest and most destructive natural disasters. Survivors of that traumatic incident have taken to Twitter to recall the painful memories. Videos and pictures from the Indian Ocean Tsunami 2004 surfaced online, as people mark the 15th year today, December 26, 2019, since the natural disaster. From Sumatra Tsunami in Indonesia to Messina in Italy, Here’s a Look at the Deadliest Tsunamis in History.

It was a 9.1 magnitude earthquake that struck off the Indonesian coast, at the northern tip of Sumatra. A series of waves grew up to 30 metres struck the coasts of Sumatra and the Nicobar Islands, before reaching Sri Lanka, India and Thailand. Hours later, the tsunami reached the Maldives, Mauritius and as far as the east coast of Africa. Indonesia was the worst hit. The Indonesian city of Banda Aceh reported the most significant number of victims. Many countries were to observe Boxing Day, celebration post-Christmas. The 2004 Tsunami is also known as the Boxing Day Tsunami. Sri Lanka Marks 15th Anniversary of 2004 Tsunami, The Disaster Which Claimed Over 230,000 Lives.

In Northern Aceh, a total of 128,858 people were killed, as per the statistics by the government and aid agencies. Day by day, the death toll rose. Many lost their near ones. People who survived the monstrous waves have taken to social media, remembering the victims and the natural calamity the news of which shook the entire world. In India, close to 42,000 people were rendered homeless by the waves that hit the islands off the eastern coast. According to reports, above 3,500 people were killed and near to 9,000 died on the mainland, mostly in the southern state of Tamil Nadu.

15 years ago, the Boxing Day tsunami devastated the coastlines of 14 countries - resulting in over 230,000 lives lost. Today #60Mins remembers those affected by the tsunami and looks back on the late Richard Carleton's report from ravaged towns in Indonesia and Thailand. pic.twitter.com/m8FAwDDbdV

15 years ago at this time South Asia got rocked by the #BoxingDay #Tsunami . My family was in Chennai at the time. ⚽️ was forgotten as we surveyed the impact. An unspeakable tragedy.

No Tsunami Warning System At the Time!

This event was devastating in part because at the time there was no tsunami warning system in the Indian ocean. However, with the right tsunami education, lives can still be saved.

Remembering the Lives We Lost!

Solemnly remembering the 2004 Indian ocean #tsunami, the hundreds of thousands who lost their lives and the countless lives that were changed forever. Years may have passed by, but the memories do linger.

Thousands of buildings and homes were destroyed in Indonesia as the wave swallowed large parts of the coastline. Sri Lanka was the next worst-affected country with a death toll of about 40,000 while in Thailand at least 5,400 people were killed that included many foreign tourists. 24 Australians died while holidaying in Thailand.