In a phone conversation with Ukraine's President Volodymyr Zelensky, UK Prime Minister Boris Johnson said that his country is set to provide the war-torn nation with more military equipment. 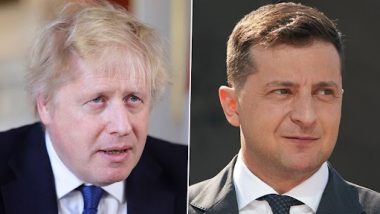 In a statement, the Downing Street said that during the conversation between the two leaders on Saturday, Johnson told Zelensky more armoured vehicles, drones and anti-tank weapons would be sent to Ukraine, reports the BBC. Russia-Ukraine War: 'Kyiv To Withdraw From Talks With Russia if Mariupol Forces Killed', Says Ukrainian President Volodymyr Zelensky.

The Prime Minister also confirmed that the UK will reopen its embassy in Kive next week, a move first announced on Friday. According to a Downing Street, this was a demonstration of "our support and solidarity with the Ukrainian people".

Zelenksy also apprised Johnson on the situation in the Donbas, where Russia has been concentrating its military efforts in recent days, while b leaders condemned ongoing attacks by Russian forces against civilian targets, including in Mariupol, Odessa and Lviv.

The Downing Street said Johnson told Zelensky that Russia would be held to account for its actions and that the UK government was helping to collect evidence of war crimes.

He also updated the President on new UK sanctions against members of the Russian military. Zelensky also thanked the Prime Minister for the training of more than 20 Ukrainian troops who arrived in the UK last week, the BBC reported.

According to the British government, the Ukrainian soldiers receiving training in the UK are being instructed on how to use 120 armoured vehicles that will be supplied to the resistance effort against Moscow.

(The above story first appeared on LatestLY on Apr 24, 2022 05:37 PM IST. For more news and updates on politics, world, sports, entertainment and lifestyle, log on to our website latestly.com).