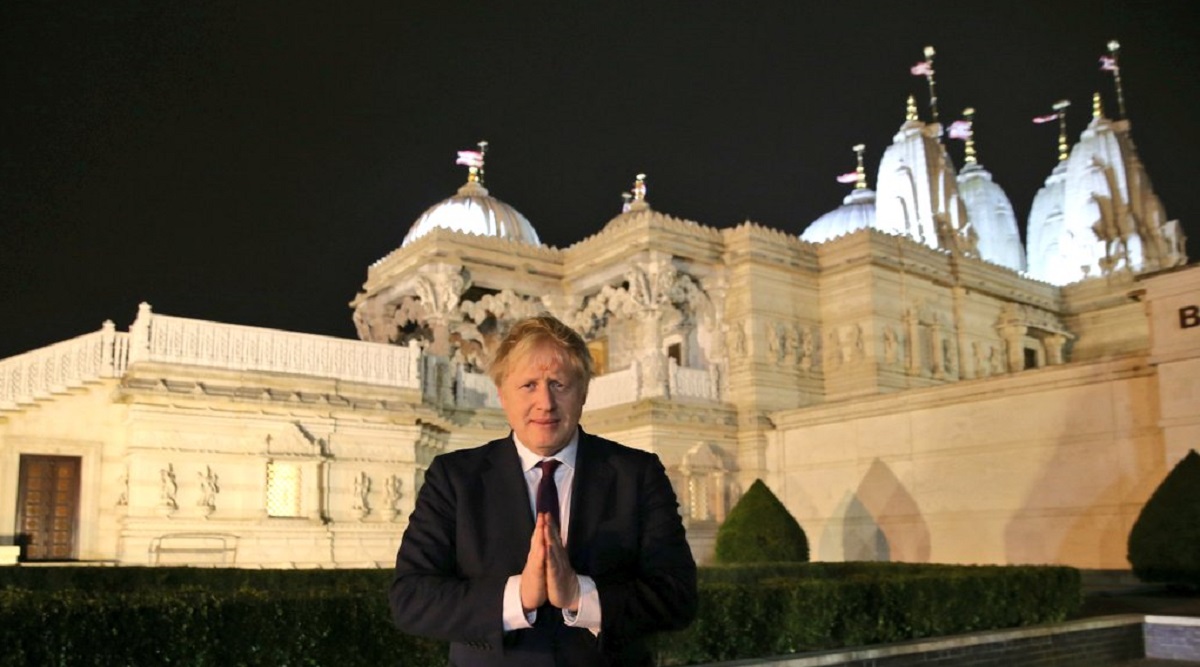 London, December 8: British Prime Minister Boris Johnson has made a pledge to partner with Prime Minister Narendra Modi on his mission to build a new India, as he and his girlfriend Carrie Symonds visited a famous Hindu temple here to woo Indian diaspora votes ahead of Thursday's General Election. Dressed in a bright pink silk sari, 31-year-old conservationist Symonds made her first official campaign tour on Saturday with 55-year-old Johnson at one of the UK's most famous temples Swaminarayan Mandir in Neasden, north-west London.

Prime Minister Johnson vowed to partner with his Indian counterpart Prime Minister Narendra Modi on his mission to build a new India. "I know Prime Minister Modi is building a new India. And, we in the UK government will support him fully in his endeavour," said Johnson, whose ruling Conservative Party is currently leading in opinion polls over the Opposition Labour Party. Boris Johnson Unveils Manifesto for Brexit Britain.

PM @BorisJohnson: “This Temple is one of the greatest gifts to our country.... It is brought to life by the amazing community spirit that inhabits it. You are giving back to our society through the great charitable work that you do. London and the UK are lucky to have you.” pic.twitter.com/YS4tJUvRGl

In an indirect reference to Labour's perceived anti-India stance over the issue of Kashmir, he noted: "There can be no place for racism or anti-India sentiment of any kind in this country". "British Indians have played a vital role in helping the Conservatives win elections in the past. When I told Narendrabhai [Modi] this, he just laughed and said Indians are always on the winning side," said a tilak and garland sporting Johnson.

In reference to the temple, he said, "This temple is one of the greatest gifts that the Hindu community has given to our country. It is brought to life by the amazing community spirit that inhabits it. You are giving back to our society through the great charitable work that you do. London and the UK are lucky to have you".

The event, also attended by UK home secretary Priti Patel dressed in a sari, marked celebrations for what would have been the 98th birthday of guru Pramukh Swami ­Maharaj, the president of the Swaminarayan Sanstha. She reiterated the party's commitment to introduce a new Australian-style points-based immigration procedure for a "fairer" visa system for migrants from all over the world, including India.

"The vote to leave the EU was a vote to take back control of our borders, and that is exactly what a Conservative ­majority government will do by getting Brexit done and ending freedom of movement. Immigration will finally be subject to democratic control," Patel said.

In a letter to the nation on Sunday, Johnson says that the new immigration system would allow them to make it easier for the brightest talent from around the world to come to the UK.

"But it will put in place tough new checks to ensure that lower skilled ­migrants only enter the UK if there is a specific shortage of workers and that their stay will only be temporary. ­Everyone who comes to the UK will contribute to our NHS from day one – that is only fair," he writes.