The flood situation in Assam's Kamrup district deteriorated after the flood waters entered new areas affecting more than 70,000 people in the area. 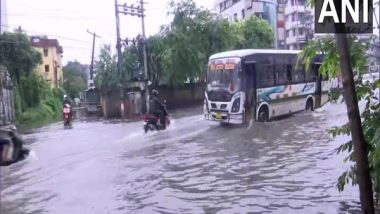 A visual of Assam flood from June 16 (File Photo/ANI)

The water level of the Borolia river and other major rivers of the district are rising up following incessant rains. The flood waters of the Borolia river on Thursday washed away a portion of an embankment at Choumukha and submerged several villages in the Hajo area.  Assam Rains 2022: 1 Dead, 2 Injured After Auto Gets Crushed Under Tree As Heavy Rains Lash Karimganj City (See Pics)

Similarly, flood waters have submerged at least 77 villages under the Rangia sub-division in the Kamrup district affecting nearly 44,000 people. Bhabesh Kalita, President of Assam Pradesh BJP and MLA of the Rangia assembly constituency said that many districts of the state have been affected by the current spell of the flood. "Following incessant rain, the flood situation has deteriorated and the flood waters have damaged many embankments. A large part of the Rangia sub-division has been inundated by flood waters and many families have become homeless. Assam Rains: Heavy Rain Lashes State for Third Day in Row; Two Children Crushed in Landslide

Two relief camps have been set up in the Rangia town area. I visited the relief camps, and took stock of the flood situation, and relief materials distribution. I appeal to the general public and workers of BJP to stand with the flood-affected people and to extend their help to them," Bhabesh Kalita said. Many roads and 3226 hectares of cropland in the district have been submerged by flood waters. According to the Assam State Disaster Management Authority (ASDMA) flood report, more than 11.09 lakh people in 25 districts of the state have been affected by the current deluge. Four people died in floods and landslides in the state in the last 24 hours. (ANI)